So it seems to be that Peter Jackson is never going to disappoint me when it comes to transform J.R.R.Tolkien’s book into a movie. He is a directional phenomena.

After an excellent trilogy of The Lord of the Rings over Frodo’s quest of Ringing, now it’s about a Hobbitual experience about Frodo’s uncle Bilbo which stages 60 years earlier of LOTR advents. 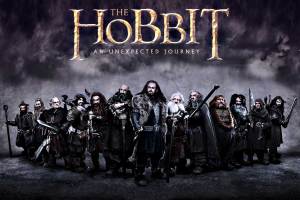 Bilbo is about to celebrate a ‘nelson’ and makes up his mind to pen his own adventure for Frodo. He begins to ink with a place called ‘Lonely Mountain’, where Dwarf King Thror clements a welfare state. This is the golden period in Lonely Mountain, when it’s people are gay and wealthy, where no darkness empark until the arrival of Smaug, the dragon. Smaug occupies and forces the dwarves to settle out of Lonely Mountain. King Thror’s grandson Thorin watches the army of Elves standing nearby but not coming to rescue them which makes him hideous of Elves.

Enters the writer, half a century years old uncle Bilbo, living in Shire. He meets the wizard, Gandalf the Grey but is unpleasant to see him. Gandalf hosts a dinner party at his home to Thorin and his dwarves to his surprise and without his permission. Gandalf reveals the mystery of all this on Bilbo is to recruit him as ‘burgler’ in Thorin’s army of dwarves to fight and enter the Lonely Mountain. First, he refuses but later on accepts the offer. This is Bilbo marching towards unexpected journey where many adventures welcome him like their horses captured by the Trolls, fight of Misty Mountains, and battle against the Goblins and the Azog.

Famous filmmaker Guillermo del Toro was roped in as the movie’s director but later on Peter Jackson replaced him. The principal photography (shooting) of this first installment of The Hobbit began from March 2011 and ended in July 2012 with a filming period of 266 days. The whole movie is picturised in New Zealand.

Howard Shore, who produced one of the most excellent music scores of the last decade in LOTR Trilogy, returns as the leading musician for The Hobbit Trilogy. Few actors reprise their LOTR roles, most significantly 91-year-old Christopher Lee as Saruman The White.

The first installment has grossed $1 billion. The movie was nominated in 3 Academy Awards and BAFTA Awards each. The Middle-Earth story will proceed on December 2013.