In the name of Blood. With an extreme sign of no mercy. Speaking blague over Bible and hunting (or you may say haunting) a human flesh to heal others. An implausible ritual tracing from Africa and landing in Europe.

The boy in the river! Hmmm the title itself is the junkyard of a confound investigation. Exactly 10 days after 9/11, a mutilated torso is found floating beside Tower Bridge in London. The body is unidentified with no traces and no witnesses. Scotland Yard jumps in and the murder squad works on this brutal murder. The investigation team seeks the help of the author Dr. Richard Hoskins who is a young professor of Theology with a profound understanding of African tribal ritual and religion at Bath Spa University. 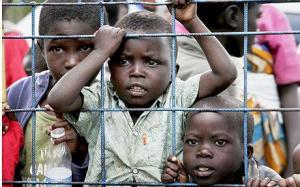 Being involved and case studying the murder, the author corners back to his grief-ing past when he traveled to Congo attaching his newly married life with Sue to the existence of politically disturbed rigid environment from 1986-1992 when he was in his 20s.

In those times, Congo was ruled by the corrupted dictator with a leopard skin toque, Mobutu Sese Seko. Under him, Congo suffered a kleptocratic era during his 32-year presidency. The country was economically disturbed with extremely high inflation and human rights violation.

Life of newly married Hoskins and Sue laid under the tribal areas and villages that supported Mobutu. Slowly with the passage of time, the couple adjusted and learned their Lingala language and culture. But they also confronted their tribal rituals and religions which later on turned in their life to be a dramatic heartbreaking account.

It took years to solve the murder mystery. But step-by-step, with years of investigation gesticulating, they come to understand a nexus from Africa to Europe about the tribal rituals followed by many thousands of Africans on both the continents.

The major plus of reading this book is by literally reading a murder mystery, you actually come to know Africa’s traditions that involve crime. The book speaks about Muti, a Zulu word used for traditional medicine widely known in Southern Africa but the disaster to the nature of Muti is that it is known as a medicine murder and deals in Muti Killings which commands a human sacrifice or spilling of blood in order to excise body parts for incorporation as ingredients into medicine and concoctions used in witchcraft.

Dr. Hoskin also explains Kindoki. Kindoki is a powerful belief of being black magic or witchcraft by evil spirits which abandons child and ritually abuse them beyond the limit. Nganga is a spiritual healer dealing in Kindoki in West Africa, especially in Congo. There is another specific term ‘Yoruba‘ which Hoskins doubted to be involved in the murder. Yoruba is a religion followed by people from Southwest Nigeria and Southern Benin in West Africa that deals in spiritual practices.

It really surprises me that people migrating from Africa to other continents to develop a better life mostly stuck to their blague traditions and still follow the practices which cost lives of their own kins. Hoskins brings the practices into the realistic limelight to show how for many years or decades, the African children were getting abused and murdered. Quite a shocking account!