Solomon Northup was a 19th century Afro-American migrated in New York and born from a father who was freed from slavery at his master’s will before migration. By profession, he was a carpenter, farmer and violinist. His surname Northup was brought up by his father Mintus on his own. His father bought a state-owned property which was a big thing in those days for a freed slave. Solomon and his brother got education among fellow New Yorkers which was also worth notable.

Solomon got married in 1829 and raised three children. He built and earned high reputation as violinist. Then came the moment when in 1841, he was offered by two men to join a musical crew of their circus company to Washington as a violinist. He accepted their offer and left without informing his family. He was kidnapped and deceived. Washington in those days was evil to black-free unlike New York and cotton expansion had widely profiteered the business of slave trading. Here began a series of 12-year slavery to Solomon.

I feel sorry for Platt oh I mean Solomon Northup, not only for being slave for 12 years but also for making a movie on you which after watching it, I don’t understand what stood applausable for critics and panel of juries to recognize it one of best movie. To be honest and exactly try to speak my opinion, the movie wasn’t that good.

The biggest failure of this Brad Pitt movie is direction that never impress and is like a second-graded cameraman shooting but trying to avoid director’s CUT. Unimpressive physical-abuse scenes besides one you will read later. The moment Solomon got kidnap lacked a reflexive screenplay. 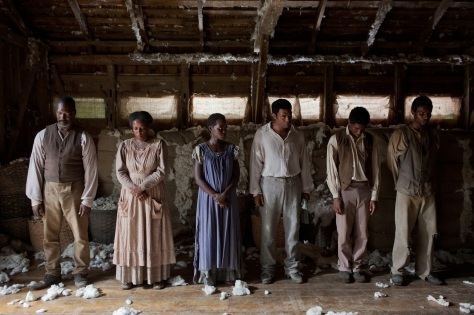 Few book readers of same title have argued that sexual encounter in the beginning of movie was never mentioned in the book. I guess the girl was director Steve McQueen himself who used Solomon’s hand for orgasm :S The slave who was stabbed in the boat while trying to save fellow slave of getting raped is also not written in the book. Instead, the guy died from smallpox.

Fight between Solomon and Edwin is more to mockery of film making. Once Edwin fell in pig pen from the back, he is absolutely clean in the next shot. Clap Clap Clap!!! Carefully notice the drink toasting scene in the beginning with Solomon and the kidnappers. Solomon glass is half-filled while one of kidnapper has his glass empty. Next scene!!! I was surprised that the kidnapper was drinking empty-glass!!!! I was forced to click few seconds back and woaaahhhh his glass which was empty before was actually half-filled with wine in next shot!!!! LOL Was someone peeing from the top??

Husband of Solomon’s daughter looks like if he is unhappy of his return enough to trash him back to slave traders. Mercy on film making, where the f*** did the director find such annoying character??

The most impressive of all and the thing which classifies it an art was the leading actor Chiwetel Ejiofor’s role of Solomon Northup. With a natural haunting boo-face, he just revitalized his character with every step and new field of slavery. A physical role that demanded anger hidden in his patience was so violable like the real Solomon. He just shaped a hunger of freedom and mental capacity of madness towards returning back to New York to his family which was negro-free in mid 19th century.

The most remarkable moment in movie are not one but actually two different scenes. One is which justifies the role Chiwetel Ejiofor has remarkably played and exemplifies in a-minute-and-half non-stop half-throat hanging scene of Solomon. Goodness me! the viewers who got amazed of Chitewel’s role till the hanging scene is about to begin, will keep their eye balls wide without plucking in the lashes and will keep noticing Solomon’s neck and movement of his feet. These non-stop action scenes are a great test of any actor’s capability of what caliber of performer he/she is and that is where an actor deservedly win your heart. Same eye-open bravura caught my heart last year when Anne Hathaway in Les Misérables performed ‘I Dreamed A Dream’ in a single shot.

The other scene is when Patsey played by debuting Kenyan actress Lupita Nyong’o is brutally tortured by Edwin for her absence in plantation. She is stripped and tied with tree and receive the whippings. If height of torture wasn’t enough, then comes an emotional scene. Edwin hand his whip to Solomon to make the squeaky beatings. Intolerable and mischievous act by Edwin force him to obey his cruel master but give soft whips in despair. Enraged Edwin seizes whip from him and make wild whipping.

Brad Pitt!! what a waste of cameo like seriously!!! Meaningless background scores when it should not have been played. Overall an awful movie and if it worth to watch, that is because of truly marvelous performance by Chiwetel Ejiofor.