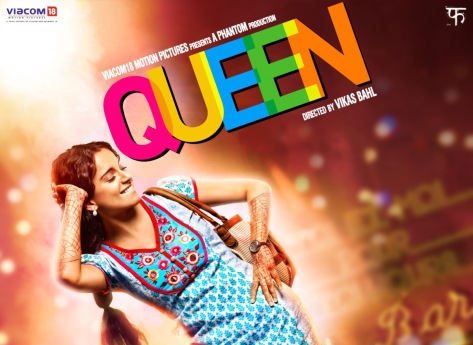 Alright so this movie, this movie is box-office Super Hit with critical acclaim!! It is produced by Anurag Keshyup’s Phantom Films and Raghav Bahl’s Viacom 18 Motion Pictures. Kangana Ranaut and Rajkummar Rao are principal casts. After already watching ‘English Vinglish‘ and ‘Cocktail‘, Vikas Behl’s Queen was no surprise package for me. The trailer already had its say but still watching the movie was a formality.

The movie starts with breakup and end of marriage!! wooaaahhh!!! now wats next, honeymoon????? typical Dilli middle-class girl Rani want to go Paris ALONE?? alright go. Her parents drop Rani bitya to the airport but guess what, Raniya bitya travel from Dilli to Paris by 3 different Air France air-crafts :’D There are three different shots of plane while take-off. Each time, the aircraft is different!! I can’t believe this!!

Rani’s first actual encounter in Paris is incidentally with a half-Indian girl Vijayalaxmi who can speak Hindi and English. What is so surprising? Am I not watching a movie? Both become friends and stay together. It is either comical or unrealistic to notice that in the first half of Rani’s Paris trip, she encounter more French people speaking their native language to her strictly rather than French speaking English in later half.

Once upon a time, both saheliyan Rani and Vijaya return hotel from nightclub and guess what!! they are caught drunk by Raniya bitya’s pariwar sitting in front of lappy while video chat… like howwww?????? ok leave this, typical sanskari pita get turn on after looking at short-dressed hot Vijaya on video chat… round of applause!!!!

Alright now she is leaving to Amsterdam ok because she want to honey-moon her trip at more than one place. Well it is a good thing to visit new places and secondly it’s her wish (none of my effing business). Now she is staying in hostel where she come to realize that she will live in hostel room with 3 international men. One is Russian, one is French and one is Japanese.

Yup she did panick but den Dilli ki simple girl adapt to the situation and become friends (Y) now their dosti will grow more and full mastiyan begin until the guy who broke supposed-to-be wedding with Rani bitya poop back and become doggy without bone to her. Do me a favor, kindly ask’em how the heck did he find her address in Amsterdam?? Did he come to realize the movie was ending in next 20 minutes??

Once Rani bitya went to locate the address which her Parisian nangi saheli Vijaya gave to locate and send her friend Roxette the gift. Next moment was jaws-open. Roxette works in pole-dance club and she is Rukhsar, a Muslim girl with absolute urdu-accent and too much urdish words which was so unnecessary but yeah hilarious. She says she has degree in commerce but due to unemployment, she choose this exotic job!!!! bravoooo….

Rani bitya go with her friends to sex-toys shop!! and she never realize where she was!!! she never felt suspicious even after wearing booby-hat!!! oh my!! do simple girls are really that innocent??? she meet a challenge from an Italian cook to bring/promote your desi food in international food competition. You really wanna know who wins the competition?? :P Then the Italian guy asks her for kiss in reply, and Dilli ki simple girl who never dared to hug Vijay the wedding-breaker actually lip-locks with the Italian guy!!! oh my this is just toooo much.

Phuhhhhh have to cut it out but boyy oh boyyy!!! Well there do are plus points. Direction was good, Amit Trivedi music was excellent and two good ear-soothers were ‘Kinaray’ and ‘O Gujariya’. Kangana has done her best shot so far, marvelous acting. She keep alerting the viewers that she is serious about her career. After ‘Fashion‘ this is her finest performance. Rajkummar original as always. Lisa Haydon as Vijaya was skin-show. Sabeeka Imam as Rukhsar aka Roxette showed the viewers where her roots belongs to, it was fantastic Urdu accent. Yup she is Lucknawi.

Movie could have ended in mere 80 minutes. Too lengthy and numerous useless scenes. End was predictable. A bogus movie.