La sirène du Mississipi (Mississippi Mermaid) is François Truffaut’s romantic film based on Cornell Woolrich’s novel ‘Waltz Into Darkness‘. A French film with a romantic genre is icing on the cake but what I like about this film is the exaggeration of misunderstanding between the two.
Let me summarize you the first half of the plot in brief. A rich man Louis (Jean-Paul Belmondo) owns a tobacco plantation on Réunion island in the Indian Ocean and is about to get married to a girl Julie (Catherine Deneuve) to whom he has never met but has exchanged letters. He has her photograph, so he arrives at the port to receive her but he happens to meet the other girl claiming that she is Julie and the one in the picture is her sister.
Later on, they fall in love and get married. Louis gives her access to his bank accounts. One day he gets a letter from Julie’s sister complaining her absence and threatening to call the police. He informs Julie about the call and suggests to write and inform her sister asap. The other day, Louis comes to know that the lady he married was not Julie but an imposter who ran away absconding 28 million francs from his bank accounts.
Louise and Julie’s sister Berthe hires a detective to investigate the matter. Days later in the French city of Nice, his eyes catch Julie’s imposter who actually works as a dancer in a nightclub. He catches her but comes to know that the impostor whose name is Marion, actually is innocent and has none of his money. They restore their relationship and one day Louis happens to meet the hired detective in the same city who is here to find the imposter. Boooom!!! Where goes the money? How will Louise save Marion from the investigation? Where is Julie? You have to find all the answers in the other exciting half.

There are few goofs in the film. I see a sudden change of dresses in two different shots of the same lunch eaten by the couples. Then there is a scene when Louise is looking for a vehicle on one side of the road where his shelter is located. But Marion takes him to the shelter on the other side of the road lol.
There are some doubts in few scenes over flaws in Truffaut’s direction. I noticed the actors were not displaying shocking emotions on their faces where the scene really needed e.g., when Marion is caught by Louis in Nice after running away from home, there is zero expression on her face. I expect big eyeballs if she doesn’t bother to scream. Same case when Louis meets the detective which should carry a huge surprise on detective’s face.
Anyhow there are plusses more than the above-mentioned minuses. One of the best things about François Truffaut’s direction is that he keeps the viewers busy and make them anxiously wait for the next scene. The excitement grows with the passage of time. Also in this film like all of his other directional work, he gives importance to small elements attached with individual’s life which offers you realism of free state of expressions which has been the major focus in French New Wave films.
Now just take an example of the introductory credits. There is no music but the presentation of introductory credits is fixed with the background audio of different male and female suitors demanding their requirements. The voices begin mixing and is exaggerated. Two theories develop from this, one is conveying the message to the viewers that an admirer will be seeking a partner in crime in the beginning phase of film and the other is an ugly truth that the necessary wants of the suitors are ridiculously high. 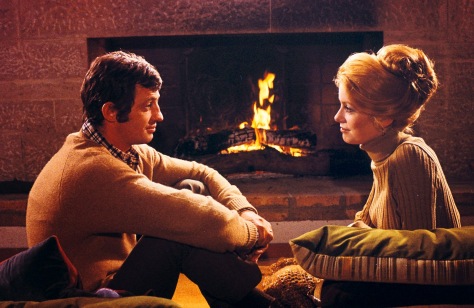 In the opening scene, both soon-to-be-married confess the truth at their first meeting despite showing sincerity in exchanged letters. Then there is a 5-minute scene where Marion the impostor wakes up one late night with respiratory problems handled by the husband somehow which gives you some glimpse of marital life. Another interesting scene is in their wedding when Louis make failed attempt of wearing her a wedding ring showing the letters never went concern of asking her the size of her finger for wearing her a ring. How natural!
In such a serious romantic drama, there are bits of funny scenes like Marion calling a lady the name of Popeye‘s sweetheart, Olive Oyl, which she truly resemble her. Then there is Marion stripping in the middle of the street which makes one driver victim of a car accident that looks so real to laugh at.
Overall, it is a Louise and Marion show. Their confused relationship has a greedy suspense. Both are lost in emotions and would make the viewers grow their concerns over suiting and choosing a right lady with expectations of no misfortunes. Although the film does be based on a novel but still the amount 28m in any currency is an enormous figure to lose in one shot. The same film was remade 32 years later as Original Sin starring Antonio Banderas and Angelina Jolie.
Ratings: 7.8/10
FOLLOW ME ON TWITTER @saminaik_asn