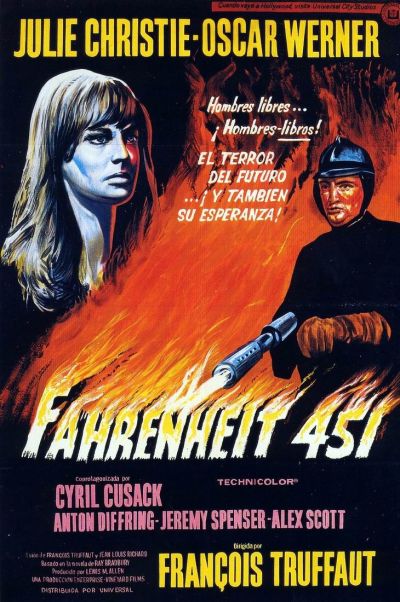 Fahrenheit 451 is the first colorful and the only English-language film of François Truffaut’s illustrious directional career. Produced in 1966, the film is based on Ray Bradbury’s novel of the same name. For me, it is one of the strangest films I have ever experienced watching.

The film shows a fictional world where some totalitarian government controls general people’s life by dissuading them from books. For this purpose, this government employs a group of firemen who detect books from every corner and burn to ashes. Among these firemen, there is Guy Montag (Oskar Werner) who gets reading inspiration from his neighbor, a 20yo schoolteacher Clarisse (Julie Christie). Once he reads, he tries to motivate his wife and her friends. Time passes by and he begins growing hatred towards his book-burning job. When he becomes a book-burning rebel, the government makes an attempt to seize him and he tries to escape and survive.

On the internet, the general description or summarized explanation of the novel is a future American society where books are outlawed and “firemen” burn any that are found. For me, my theory and basic understanding towards the novel/film are broad. What inspires me is the theme and content of the film.

Generally what we see in the film is a foundation of the ground realities clouding our brain. The film does show you an oppressive future but questions numerous objects co. existing in the same sorry state universe. Truffaut made this film in the 60s but I see this way advanced to the-then existence. The plot is easily applicable today. We see many totalitarian governments controlling people’s life. Last century, the world witnessed the same style of leadership in Stalin, Hitler, Mussolini, Saddam and II-sung.

Next aspect, the book is a source of objection by such government in the film. The firemen search everywhere to every length to dig the books; and when they find, they collect and gather all the materials and burn these all. In the film, exaggeration is tremendous. Firemen are shown digging books even in public parks, stopping people and checking their dresses. One fireman even checks shirt-pocket of an infant crying in the pram, finds a book and naively discourages the infant not to read books. This scene shows tremendous hatred and point of exaggeration where the director conveys his entire message in one shot.

There have been numerous book-burning incidents in the past. The one which particularly reminds me is from the McCarthy era when the books written by the authors favoring communism were disposed and burned under Eisenhower’s presidency. Bradbury has also stated his concerns about the above-mentioned events being the base of writing Fahrenheit 451.

Why books? In the film, this question will give you a lot of answers. Especially in one scene where the home of Clarisse’ friend is raided for an understood reason, the captain of all firemen (Cyril Cusack) spots a room full of books and gets some space of more than five minutes with Montag to present his hatred and forward his explanation/opinion about the literature. One of the lines the captain speaks to Montag in the film goes this way, “Go on, Montag, all this philosophy, let’s get rid of it. It’s even worse than the novels. Thinkers and philosophers, all of them saying exactly the same thing: “Only I am right! The others are all idiots!” This captain’s ideology hit me for a second and showed a different perspective for a book-reading habit. Is this an ego which turns you a writer and makes you think that people will avoid others and listen to you?

About fictional novel, the captain discourages the viewers that people in such books never existed but by reading, they tend to assume such characters leading their lives towards unhappiness by thinking that they can never live that life described in such books. I must admit, this lengthy scene was one of the best in the film.

Montag the leading character has another explanation that the books make the readers unhappy and anti-social! How come? Because according to Montag, books change the people, their ideology, their way of living and thinking; and them reading people tries to become better than the others. How true is this? If you really begin judging the reading habit from Montag and captain’s angle, you will think twice.

Truffaut’s depicted future-world looks highly realistic and fashionable. I am very impressed with the heavy detailing of Montag’s place of residency. The color of walls, interactive TV program, wall telephones, and furniture was outstanding. Then we see monorail which was not frequently watched in the films those days.

Last 20 minutes of the film takes the viewers to a different dimension. The dystopian state turns into utopian. Montag shifts from one world to the other. While escaping from the cruel book-burning world, he unintentionally enters the world of hope where people from different communities and walks of life are named by some famous books. These individuals are learning by heart and repeating every word of their books to spread the literature to the future generations and avoid ignorance. There is one striking scene where a dying old man is filling/feeding the words of Weir of Hermiston to his nephew.

From a religious point of view, it reminds me the time when knowledge was to overtake ignorance in the times of Prophet Muhammad PBUH with time by learning and repeating the verses of Holy Quran and his Sahabah (Prophet’s companions and disciples) by recording the testimonies what the prophet said. It is just my understanding from those particular book-people scenes.

The film overall is a wake-up call to save the books, the literature, the treasure of knowledge from various categories of books and defeat ignorance. Truffaut’s artistic direction is yet again the winner. Very very ostentatious and fascinating work! This is like someone presents a theory in cinematic format and brings the world to knees. The film is sci-fi in some sense but also very humanistic theoretically. But his work plays on you, hypnotizes and manipulates you. Although there are some differences and missing elements from the film as compared to the novel but overall I believe Fahrenheit 451 is easily one of Truffaut’s most impressive works.