Fences was a play written by August Wilson back in 1983 which, years later, won Pulitzer Prize for Drama. In 2010, Kenny Leon directed the broadway based on the book with Denzel Washington and Viola Davis as the leading cast. The book became a source of cinematic adaptation with the very same actors repeating their roles.
The film is set in Pittsburgh of the 1950s. It is about a man who wanted to become a baseball player when he was young but couldn’t due to his color. So now he discourages his son to follow the same path.
Fences will be remembered amongst one of the most brilliant films with the most ordinary story. There is simply nothing special or new in the story to watch. What makes this film look great and worth watching is due to almost all the technical aspects besides the story. A gritty drama directed by Denzel Washington and magnificent performances by himself as Troy and Viola Davis as his wife, Rose. I fail to understand why wasn’t Viola nominated in the Oscar for this film in the leading role rather than supporting role. But wherever is she nominated, she is the showstopper.
This is my first experience to watch Viola in a well-defined role as her role was pretty short as Amanda Waller in Suicide Squad, plus I have never watched her in How To Get Away With Murder. What is top-notch about her role in the film is her ‘Hurt’ aspect as Troy’s wife. Soon when Denzel reveals some news to her shock, she is different than you have been watching her in the first half of the film. She then drops your jaws and till she has expressed her severe melancholy to her husband, your eyes are about to get wet. She makes you feel what hurts and disappoints her as a loyal wife and a mother. In short, a stupendous accomplishment. 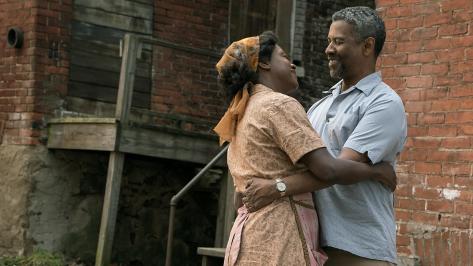 Denzel/Viola onscreen chemistry as the old couples is phenomenal. They share few outstanding scenes, an even father-son rigid relation is a stunning sketch which grows your nerves. Besides them, all the actors involved maintains a rich display of supporting characters which make you sit and watch. Like Troy’s brother, Gabriel (Mykelti Williamson) is at a corner but a very attention-seeking character who is mentally unfit and often gets in trouble in the neighborhood. Then both the sons of the Troy are entirely different individuals who have a few verbal exchange and disturbed relation with father due to choosing different careers which father Troy never wished. Troy’s friend Bono (Stephen Henderson) has a different command, a loyal friend who understands Troy’s stance towards his wife and kids, and ideology to life. Denzel as the director is supreme in character detailing. The placement of all the characters is perfect.
Fences without violence is a brutal violence in silence. Your ears will listen to the whispers, the cries behind a failed state of an honest individual who roared only when his color became an unbegged penny. A sublime sad film.
Ratings: 8/10
Follow me on TWITTER @saminaik_asn