The poor father-son duo of Albert Steptoe and Harold Steptoe run a rag-and-bone business while living in Shepherd’s Bush, London. With time, Harold’s desires and aspirations meet Albert’s rigid tendency of accepting change. His naivety irritates Harold and pretends to be ill if the son leaves to live some portion of his life on his own. Dirty ol’ man Albert lies to unsuccessfully avoid the blame for his mischievous blunders. Albert jeopardizes wherever Harold takes him, say cinema, restaurant, party. The best writing lies in the generational conflict of these two characters for eight seasons and they never disappoint at all.

The old BBC classic sitcoms were always known for their rich content, especially a thoughtful theme on which the quality of humor was so delicate and rib-tickling. Steptoe and Son (1962-1974) is an influential and groundbreaking sitcom that made its rounds in British households in the early 1960s, right on time. Because around three million people in Britain were living on the poverty line. So this sitcom was a fit for their sentiments, especially for the Cockneys.

I will not skip mentioning both the leading actors, Wilfrid Brambell and Harry H. Corbett. I mean what better father-son chemistry you will ask for. The generational conflict and comic timing between them were so striking and growing their partnership with the viewers for years being the only two major characters of the show is extremely difficult. Even Sandford and Son needed the assistance of the supporting characters, especially Aunt Esther but the original show remained constrained.

Another significance of this sitcom is its cult status in Britain. Steptoe and Son was easily the first well-known British sitcom about a working-class, describing poor working men living without women in different setups. You can take an example of Ronnie Barker‘s Porridge and Open All Hours in the 1970s or most specifically the greatest British sitcom, Only Fools and Horses. The sitcom’s international influence can be measured by the fact that American tv producer and developer Norman Lear adapted the show and created Red Foxx starred Sanford And Son for NBC. 16 of Steptoe and Son episodes were recreated in the American adaptation. Steptoe & Son helped Norman Lear build his legacy in the 1970s when his developed sitcoms on NBC and CBS dominated the decade.

Had Steptoe & Son never happened, I wonder what the state of comedy would be in both regions. This is easily one of the best British sitcoms I have ever watched. 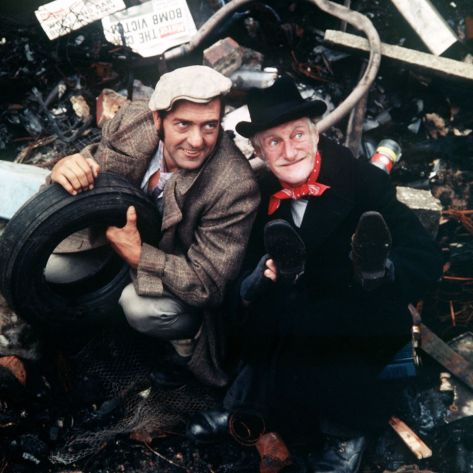