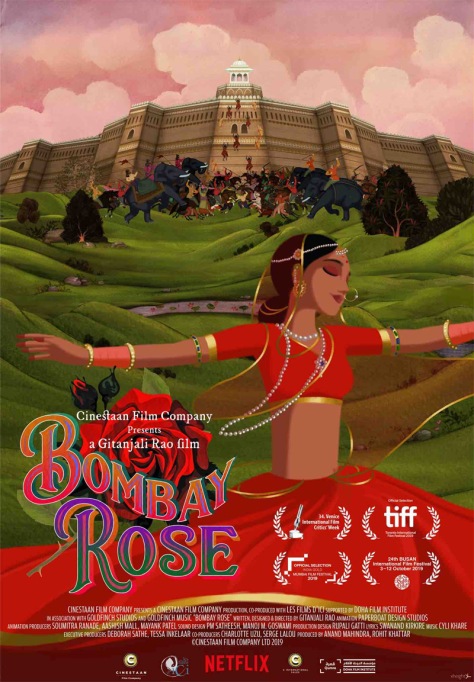 Bombay Rose is an animated film about flower sellers Kamala and Salim who falls in love but are reluctant due to some restraints.

This 90-minute drama is an exuberant work of art because it took 60 artists to produce frame-by-frame painted animation on the computer for more than a year. The credit should be given where it is due, Bombay Rose is kaleidoscopic and vibrant.

And then the film was not just about Kamala and Salim’s romanticism. Director Gitanjali Rao scented this artistic work with some impressive detailing in the screenwriting. For example, the character of Ms. Desouza was life. A yesteryear actress of the 1950s, her melancholic loneliness, visiting graveyard, and the scene where she walks with Kamala’s sister Tara and the epoch changes. 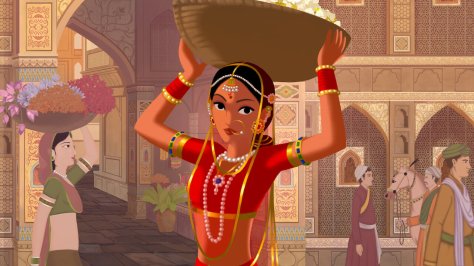 A few may observe that the director pressed the importance of cats in the film. It is not like it just showed up in one scene but a few screen minutes were given to keeping and caring for pets. Two characters kept cats, one was Ms. Desouza and the other was Tipu. Desouza was old and lonely while Tipu was mute and deaf. Figurative and thoughtful.

The film also highlighted the social issue of child labor. They also interconnected the thickness of the plot within the frame like Ms. Desouza’s grave visit and Salim’s flower business was so much everyday walk-the-talk society moments. The usage of old Bollywood hit songs in the film enhanced the grace of the presentation. Some well-known versatile artists like Makarand Deshpande, Anurag Kashyap, Shishir Sharma, Virendra Saxena, and Amardeep Jha gave voice to the characters.

Bombay Rose also gives a sharp image of the typical middle-road stories that remind you of 1970s Bombay. The dialogues are natural and character-driven; differ with the characters and give a real feel instead of a reel. If the film was transformed from animation to live-action, the direction will somewhere give you a feel of the old-school quality social-drama directions of Basu Chatterjee and Hrishikesh Mukherjee.

Bombay Rose was screened in Venice and Toronto film festivals and has met with deserving critical acclaim. The film is a marvelous state of finesse in mosaic and cinematic poetry of a typical Bombay street diary.