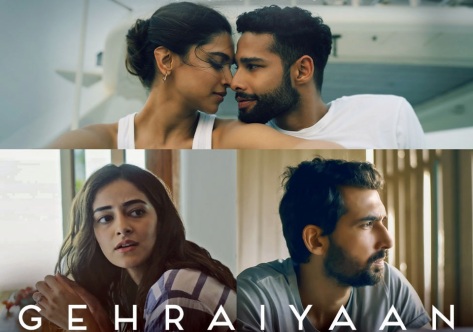 Alisha Khanna’s (Deepika Padukone) personal life has been through a lot of torments due to her parents’ marital failure which led to her personal battles with anxiety and depression. She is a yoga instructor and struggling in a live-in relationship with Karan (Dhairya Karwa) who is a writer but not yet employed. Her cousin Tia (Ananya Panday) is engaged with businessman Zain (Siddhant Chaturvedi) and invites Alisha and Karan to their beach house. And there, Alisha finds Zain in similitude through understanding and trauma of their disturbing past. In a couple of meetings, they sense unusual and a secret love affair begins.

Okay, we all have our opinions about this film but let me admit this, Gehraiyaan has an ordinary story, a typical soap drama where relations keep changing. But Gehraiyaan has more things to offer than the story itself. Gehraiyaan has technical brilliance in direction, background score, cinematography, dialogues, editing, and credible performances. The story is ordinary but the screenplay gives a lot of depth to relations and human behavior complexity which is the biggest plus of the film.

For once, we have to keep our opinions aside if the story is toxic or vulgar, put yourself in Alisha or Zain’s shoes and feel the air. That guilty vibe releases a lot of negative energy but also makes people suffer from heavy consequences, and this film perfected both situations. A lot of factors are involved in making this rectangle complicated. Alisha and Tia are cousins, Tia’s money is involved in Zain’s business, Alisha’s yoga app has Zain’s investment, and Alisha-Zain’s chemistry occurs at the wrongest possible time. And Karan is someone who is mostly not in the picture because he is usually occupied with writing and looking for a publisher to invest in him. Alisha is the provider but basically, they both are strugglers. When all this is happening in the rectangle, it becomes highly unlikely to lose one of the ropes. So I feel Gehraiyaan gave us a look at the relationship and the cost of digging a forbidden well.

Shakun Batra surely has some particular sentiments that help him describe toxicities and omens of relations so well. He did that brilliantly in Kapoor & Sons and now this. The realism of Gehraiyaan’s tense emotional hiccups hinges on the capricious tone of uninvited events that keeps knocking on the broken doors. There are loose ends in the middle of the film but emotional fluctuations have excellent depictions. Alisha’s poignant individuality and scattered melancholy is a remarkable observation. I like how she connects small things with her past and explains perfectly how a shattered tragic past keeps haunting and agonizing a human.

The continuity of such a screenplay is blessed with a very unfeigned and heartfelt background score, very indie and blue. When it comes to performances, Deepika and Siddhant have stolen the show. Their body language and facial fluctuations are superb. Observe Siddhant when Jitesh shouts at Zain to separate his love life from business, and you see how he mentally breaks in replying. Siddhant seems to be a promising actor to me now; this performance and the one in Gully Boy are quite different and settled himself into his characters which is one of the few critical things the actor must learn. Deepika’s breakdowns are just phenomenal. Her Alisha’s anger toward her father, her verbal heated exchange with Karan when he doesn’t inform her of his leaving, her tense buildup in Zain’s office when the studio gets closed, her emotional breakdown in Jitesh’s car, her heated imbroglio with Zain outside the building, and her fight with Zain in the cruise, and maybe the scenes of Alisha goes on and on to describe what a sensational performance Deepika has exhibited.

This is the first time I watched a film featuring Ananya. Not good but also not a bad actress at all. There are glimpses of establishing her name but will take time. But she has her moments where she played her role well, most prominently in her scenes with Zain; like the one where she doubts who the contractor contact is. Observe her facial expressions when she immediately places Zain’s phone back. Naseeruddin Shah and Rajat Kapoor gave strong supporting roles, especially Rajat.

Gehraiyaan met its low in the last half an hour. From the cruise to the shocking development from the will of Tia’s father, I detected that the film could have concluded somewhere better than what it showed. But I also sense that ending on a simpler note of breakup after Tia gets to know would have killed the story because we all knew that this is the most understood theory and no one would be happy. But I am impressed with the final scene. It was a smart technical finish where the audience can build a lot of theories.

I noticed a severe backlash about the film, the unacceptance of the audience, and their being dismissive of the relationship. I think India is still not ready for a film like Gehraiyaan. Perhaps, the audience will understand this film in a few years.

Gehraiyaan is for those who have been through an emotionally disturbing past and are stuck in relations that certainly had a present but no future at all. Gehraiyaan has a genuine score of wants, goals, and desires. The film does not exaggerate the chemistry but gives realism to how the not-so-promising love affair ignites the emotion code.