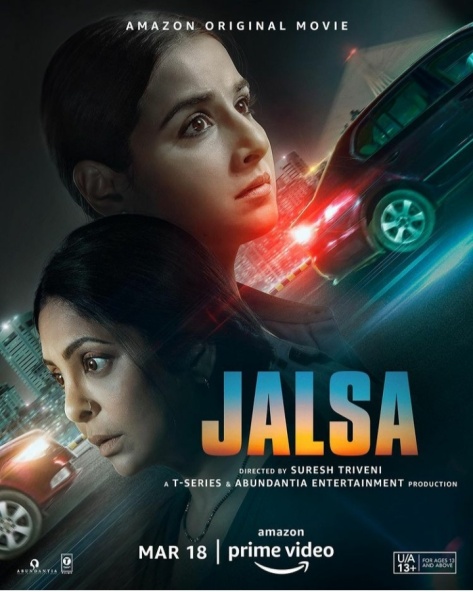 Jalsa is a hit-and-run thriller revolving around two women from different backgrounds. Maya Menon (Vidya Balan) is an influential television journalist and Rukhsana Mohammad (Shefali Shah) is the servant at Maya’s residence who looks after their cooking and her son with cerebral palsy. One night while returning from her work she gets heavily sleepy and unfortunately hits a girl who luckily survives but is in critical condition. But Maya in a panic doesn’t help her out but runs away. The next day, the news is broken to her that the girl is Rukhsana’s daughter.

First of all, what a magnificent story! And then a superb script that, at a low pace, builds the consequences on nerves and depicts the reality from both sides. If regret has a face, just look at Maya throughout the film after the accident. The definition of misery is flawlessly installed in Rukhsana.

Jalsa’s aim was to show us how both parties are affected by the accident. And it is so complicated on Maya’s part as she would have never imagined that in the entire city of around twenty million people, it had to be Rukhsana’s daughter.

The film gives enough space to both Maya and Rukhsana to boil themselves with regret and fury respectively. Rukhsana demands an answer to who hit her daughter whereas Maya tries to settle herself but the norms keep compromising due to Rukhsana’s existence.

Maya is already troubled with her personal life due to her divorce and then her only child with challenges. And then her nature of work going live to her millions of television viewers was also heavy. So this is one solid reason for her questioning herself to either help the victim or run away.

Director Suresh Triveni previously worked with Vidya Balan in Tumhari Sulu. But the directions of both films are quite different. Tumhari Sulu was quite an entertainer but Jalsa is very dark and gritty. This shows that Suresh Triveni is flexible with scripts. But one common thread is improvising Vidya’s character. Vidya in Jalsa is incredible. A tone she has set for Maya after the accident doesn’t evaluate if her performance is for reel or real. Many of her scenes break you like when she screams in the parking lot, throwing her anger at her son, when her car is stuck in the rally, during her argument with her mother, or when she accuses Rukhsana of laziness and demands not to show up again. This is easily her best performance since Tumhari Sulu.

When the film developed from the accident, I was very sure that Shefali as a heartbroken poor mother will nail this role.  She had comparatively less challenging scenes than Vidya but whatever she got in her part, she did exceptionally. See her superb desperation when she beats a guy in the shop.

Yes, Jalsa has plotholes and some are beyond logic. When Vidya screamed in the parking lot, how come no one listened to her? If the security guard slept in the CCTV room, how come he didn’t check the recording later? Unarguably the most senseless scene was Maya’s mother letting Rukhsana take her son to the beach. How did she allow that? Knowing that Maya is always furious about not letting her know first, how come she allowed without checking Maya?

And just another Bollywood film where the director failed to conclude the film where it should have. That final scene was totally rubbish and made no sense at all. It could have been so better if the film would have ended with Maya’s car stuck because of the political rally and Rukhsana on the other hand assumingly taking her revenge. You needed no more justification after that.

I didn’t get why the film was titled Jalsa. Why not Sadak? It would have made more sense with the latter as the same sadak had constable More been bribed, Maya’s car hitting the girl and then her car stuck on the same road in the rally when her son was in danger.