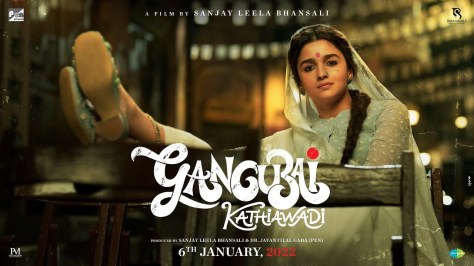 Young Ganga (Alia Bhatt) wants to become an actress and in order to fulfill her dreams, she elopes with her boyfriend to Mumbai but in all excitement of such a young age, she never realizes the horror that awaits her. Her boyfriend sells her for Rs.1000 to a brothel and the broken Ganga becomes Gangu. And after earning a reputation amongst her fellow prostitutes, she becomes Gangubai.

This is a real-life story based on Gangubai Kothewali. She was the queen of the infamous prostitution-hub Kamathipura and did a lot for the prostitutes and orphans for decades. As expected, the film dramatized the true bond of respect between Gangubai and Karim Lala as in those times it was widely known that treat each other like siblings and no one would consider messing around with Gangubai when Lala was ruling the underworld.

I don’t have enough knowledge of Gangubai because this film is based on Hussain Zaidi‘s book, “Mafia Queens of Mumbai” and I didn’t read that. And at the start of the film, there is a disclaimer that confirms that liberty has been taken for cinematic appeal and entertainment despite being based on the book so I am not sure how many facts were changed.

And I have written many times on different platforms that Bollywood is still not ready for making bio dramas because of many reasons. And one of the reasons is that the Hindi films are generally produced for cashing from commercial business and do not provide enough facts to justify their case for being a bio-drama. Sadly, Gangubai Kathiawadi faces the same critical issue. And despite all the elements of impressions implemented for beautifying the film, Gangubai Kathiawadi is more sort of a mainstream entertainer rather than a genuine bio-drama.

One of the many problems of this film is the average direction. Sanjay Leela Bhansali never disappoints when it comes to visual artistry. He is someone who is fond of showing things in a beautiful way. Even if something is ugly, he will apply makeup on it to look a beautiful ugly.

Now observe the productional set in this film and I ask Mumbaikars here, is Mumbai’s oldest and the largest red-light district Kamathipura that beautiful as depicted in the film? And Bhansali throughout the film glorifies Gangubai as if she was some symbol of national heroism. In the final scene, after observing the celebration, I felt as if Gangubai won some presidential election in the United States.

And this is why Bhansali makes beautiful films to cover the overdramatic screenplay of ordinary storytelling that qualifies for Bollywood aesthetics. Just like his previous films, this film also gives the audience a feel of absolute noir-meet-broadway theatrical rhapsody. Superb costume and production designing. This film is zenith when it comes to technical brilliance besides two of the most important things this film lacks, and that are necessary for the making; writing and direction. All the technicalities aside, the film is below-par with many plotholes.

How come Shaukat doesn’t listen from the other door when Kamli loudly informs Gangu that Bilal has gone to inform Rahim about him? Not sure how Gangu recovered from brutal injuries after Shaukat beat her. Did the time period jump? But how far has the time passed? Not a single facial scar or a scratch! How perfectly a heavy makeup can hide the gashes? She looked exactly like she was before beaten.

One of the plusses of this film is a bunch of supporting performances coming from some well-known actors in their brief roles like Seema Pahwa, Jim Sarbh, Vijay Raaz, and Ajay Devgn. Vijay Raaz as transwoman Raziabai was all about his characterization and he did a fair job. I am surprised many are furious over Vijay Raaz’s and are questioning why a transgender was not picked? Not sure how is this a problem now. It is not mandatory that the role of a trans must have to go to a real-life trans. Otherwise, what is the beauty of judging the actor’s performance at all? How often do the trans people get offers to play the role of non-trans or non-LGBTQ roles? This is a nonsense controversy. 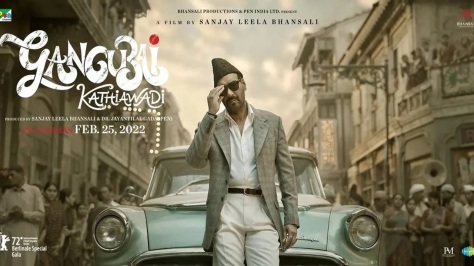 Speaking of Ajay Devgn’s extended cameo playing the role of Rahim Lala that is based on one of the three biggest Mumbai dons of that time, Karim Lala. See, I don’t like Ajay Devgn’s acting, I love his acting. And he has played character roles and has had many great performances in the past. But here I blame Bhansali over the selection because, in my opinion, this has to be the worst ever portrayal of Karim Lala. First thing, Ajay doesn’t remind me of Lala nor does he has a typical Afghani Pashto accent. Lala was pretty tall, in Hussain Zaidi’s book and in some internet sources, Lala is thought to be around 7-feet tall; Ajay is hardly 6-feet.

Ajay’s role doesn’t remind me of Karim Lala but Ajay himself. He literally did nothing different to stay in the character. I am sure many will notice that Ajay’s this performance was exactly similar to his role of Mallik in Company. And that makes me realize something. What’s up with Ajay playing the roles of some infamous mafia dons? His Company’s role was based on Chhota Rajan. In Once Upon A Time In Mumbaai, his don role was based on Haji Mastan. And now Karim Lala. Who is he playing in the future? Vardhabhai?

Coming back to the point before I slip writing other than review, there are plus points too. The film successfully addressed the social issue of the prostitutes and dramatized in a way that despite all the charms and merriness they used in their makeup to perform hanging on the doors and street, they were all bunch of eternal sadists with tragic origin stories. Gangu helped many of those unfortunate cases and the film showed that those damsels in distress were re-purchased by Gangu for a hefty amount to provide them a better life. No wonder how many such stories circulated on those streets of Kamathipura.

Before I end my review, I will definitely write about the biggest plus and the most impressive factor of the film, Alia Bhatt. This was a much-needed moment in Alia’s career since she became one of the biggest victims of nepotism charges from the global netizens after Sushant Singh Rajput‘s suicide. A kind of role that challenges her to come back and prove how her body language can perfectly construct her role. There was everything to praise about Alia’s Gangu. Of course, the film revolves around Gangu but maybe the spirit would have diminished if this wasn’t for Alia.

I have no idea what the real Gangu looked like when she was young as there is not much about her on the internet. The information about her and even her pictures are extremely finite. But Alia gave a splendid performance. And there are a few scenes where one can judge how impressively Alia executed reactions and mannerisms.

What a magnificent scene that was when rookie Gangu stands at the door and others give her tips for seducing customers. Bhansali shot that scene with quite a thought. And Alia perfected the physical behavior of an amateur harlot. In the ‘Dholida‘ track, she has a one-minute one-shot scene of enraging her dance while other women react blankly and she executes her madness so well. There is another scene where she speaks to her mom and the line is about to cut in thirty seconds and Gangu loses her temper. Some incredible portrayal of desperation was performed there. In Gangu’s first scene at the brothel, when she gets deceived and locked; I think Alia has perfected such a scenario after similar acts in Highway and Udta Punjab.

Gangubai Kathiawadi for me is a disappointment in direction and storytelling. Its technical aspects and Alia’s mindblowing performance makes this ordinary film look extraordinary.