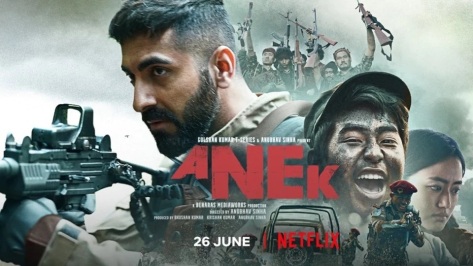 Anek is about a government official secret agent Aman who is sent to the Northeast region to negotiate a peace deal between the government and the separatist groups.

A director-actor combo of Anubhav Sinha and Ayushmann Khurrana who are enjoying the peak of their careers for the last few years come up with a very sensitive socio-political subject of the North Indian people.

It is good to observe that a few films have been produced in recent years that are based on the racism that the Northern Indians have been facing for quite some time. Communal subjects have gradually increased over the last decade which indicates that the audience is now enthusiast to try watching different content.

Unfortunately and to my own surprise, Anek neither picks screentime from a solid-looking plot nor the writing does any justice during the prosecution of the film. There is no impression from the aesthetics besides action sequences. The film is over-talkative and some scenes are overstretched. Around 150 minutes of screentime with an uninspiring plot leads to nowhere but disappointment.

There are a few scenes that were shot well though. There is a scene where Aman and Anjaiyyah argue about how to define an Indian, it was a thoughtful conversation. Then the performance of Niko’s mother when she mourns and cavils to Aman at the funeral. For me, the best scene of the film was that one-shot scene in the village when Niko witnesses a series of arrests and some parts of the place put to fire.

Anek could have been a masterpiece if the screenplay was engrossing and held a grip on an important subject. The film visibly began to collapse after approximately thirty minutes.