Produced by Apple TV+, ‘They Call Me Magic‘ is a four-part documentary about one of basketball’s greatest legends, Earvin ‘Magic’ Johnson. One of the most exciting stories on and off the basketball court, the show covers almost everything Magic stands for; his childhood, his family, and his relationships. The show also highlights a much-needed detailing about the making of his legacy in college basketball. This was very necessary due to his being arguably the greatest college basketball player since Kareem Abdul-Jabbar and Oscar Robertson.

The documentary features interviews of Magic, his wife, family, coaches, teammates, and his rivals. Speaking of rivals, I am glad Larry Bird was also part of this documentary and he had his own narrative about their rivalry and games. But Larry’s contribution to Magic’s documentary is an acknowledgment that one of the greatest sports rivalries that encompassed in the 1980s developed a respect for each other.

The icing on the cake is when the show also features Michael Jordan. You know it is a huge ask when the greatest basketball player of all time shows up in a documentary of another basketball legend. Although, there are other legends to talk about Magic like Jerry West and Kareem Abdul-Jabbar, but Michael is a different picture. And Michael Jordan already had a blast talking about his dynasty exactly two years ago. So this means a lot. And why not? Before the Bulls dynasty began, it was Magic’s Los Angeles Lakers in the 1980s that dominated. This is like MJ passes the torch of the dynasty to MJ, especially in the 1991 NBA Finals.

Besides his basketball career, there is quite an insider about a complex love story of Magic and his wife Cookie. The story has been stretched to, I feel, more than the screen length could have demanded. I felt Magic’s post-basketball career deserved more minutes than the affair. There was really a tremendous contribution he made as an investor when he started an investment company, Magic Johnson Enterprises. 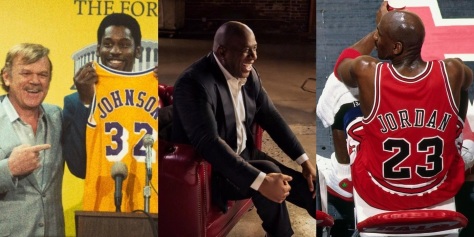 One thing I would like to address about this documentary to the readers and the audience is not to compare it with HBO‘s Winning Time: The Rise of the Lakers Dynasty due to many reasons. One, ‘Winning Time’ is about the entire Lakers dynasty while ‘They Call Me Magic’ is only about Magic. Two, the former is a television drama that is inspired by Jeff Pearlman‘s book, ‘Magic, Kareem, Riley, and the Los Angeles Lakers Dynasty of the 1980s‘ while the latter features the players giving their input through interviews. The former is scripted and fictionalized for a dramatic touch to attract the audience while the latter doesn’t compromise on authenticity as the real people show up describing their stories and incidents.

Nothing to take away from ‘Winning Time’, I loved that show as a drama that came into existence through any network that was based on basketball but the tone of entertaining the audience shall be limited to enjoying the Lakers’ glory rather than digging facts about its being real or fictional. I wished that ‘Winning Time’ would have been 100% accurate but it is okay because now we have another source on the television format, and that is ‘They Call Me Magic’.

In my opinion, the biggest plus of watching this documentary is not only to understand the ‘magic’ he spelled that started a dynasty but more than that, the show heavily convinces the audience that it was Magic Johnson who stepped NBA up financially. Before him, NBA’s fame and state were different from each other. The fame was there but the state was economically awful. The television ratings were declining, and the spectators were diminishing. The shocking fact about NBA before the 1980s is that the show was not popular enough to be on prime time. One of the major reasons was too much violence and the NBA was considered too black to be termed as drug-infested. The racial standards were poor. So Magic’s arrival changed the fate and face of the NBA who established himself as a superstar in college basketball. His popularity gradually increased and became the most talking point when his becoming a pro was on the cards.

Therefore, ‘They Call Me Magic’ is a celebration and an honest tribute to a wonderful career.