The movie is biography over an unsung Indian hero-cum-villain, a story moving from Usain Bolt to Veerappan and the movie changing its flavor in 3 phases (soldier, athlete & bandit). In 1949, he joins army and stuns his seniors in his athletics skills. He wins gold medal in Indian National Games 7 years in a row. Participates in 1958 Asian Games in Tokyo but fails. 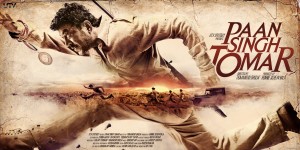 To his misery, a journey of a soldier who willed to fight war but the law (athlete soldiers don’t participate in war) made him low. His commitment towards athletics knew no bound and at age 32, breaks his own national steeplechase record. Soon he retires, village feud heats and leave the village and grows his own gang to avoid a drop of blood on his family.

Here begins Bandit King, and Tigmanshu Dhulia successfully reminds this bandit phase of movie towards Shekar Kapoor’s famous ‘Bandit Queen’. At that time, Tigmanshu was casting director of the movie and now brings more charm in directing this phase. Paan tries to resolve the issue of land acquisition with his relative Bhanwar Singh but fails. He even calls District collector but to no avail. Infact Bhanwar singh and his goons attack on Paan family in his absence but family escapes leaving his mother killed. In 1979, Paan becomes bandit and raises his army to bring terror in Chambal valley.

Revenge, gunshots, crews of gangs & dialogues are touchy and realistic. Rarely have I seen the leading cast dying not in front of camera. Mahie’s simplicity in Paan’s role twinkles but the limelight is Irrfan Khan with a loud-voiced bravo performance. He surpassed Paan Singh’s legacy from his acting towards a height. The movie I believe is one of best biographic movies ever made in Bollywood and such an excellent direction was expected as Tigmanshu is a modern history-graduate + researcher, and it took him 14 years since shooting of Bandit Queen to collect/research Paan Singh.

Movie Status: Govt should grow up and respect the sportsman before they disrespect you

Originally written on 5th of November, 2012