Captain America: Civil ͏Wa͏r is a critical game-changer in Marvel Cinematic Universe and will have a lot of impact in Phase-III movies, most specifically Russo brothers‘ next project Avengers: Infinity War.
The best aspect about the movie is despite being 150 minutes of running time, there still is a lot of room for breathing for numerous casts, parting their stories city-by-city and connecting and assembling in a proper way. There is a spectacular balance of entertainment, humor and seriousness of plot and its sub-plots.
In Civil War the viewer will witness heavy intros of Daniel Brühl as mysterious Baron Zemo, Martin Freeman as Everett Ross, Marisa Tomei as gorgeous Aunt May (cameo), Chadwick Boseman as Black Panther and Tom Holland as Spider-Man as well as restoring William Hurt with his character of Thunderbolt Ross after long hiatus. And all newcomers have given their decent shots within a certain amount of their screen-times.
Much awaited Civil War movie was highly billed for Stark/Cap rivalry but to be perfectly honest with the review-readers, it was more about Bucky/Cap eternal friendship. 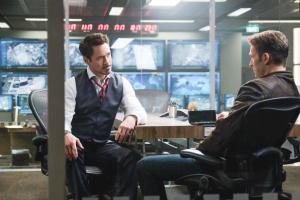 As far as original comics storyline is concerned, the accuracy is below average because a lot of characters are not introduced in MCU and their plots are precisely neglected. The Superhuman Registration Act in original story is replaced by Sokovia Accords, a bill produced by UN and signed by 117 countries. Spiderman’s significance from original story is heavily reduced as well as Baron Zemo is cleverly added in the movie with superb amount of suspense.
At the very same time, presenting a different Civil War then the highly critical-acclaimed comic book story of the same name will exaggerate some logic behind passing the Sokovia Accords bill. As the US government put a blame on team Avengers for significant damages and deaths occurred in the major events while fighting Loki and Ultron, non-super human brains will fail to understand why Ultron creator Tony Stark is not sentenced for life in first place? Why isn’t Scarlet Witch imprisoned for assisting Ultron in that case? Highly unreal for any sensible govt or powerful authority to produce a bill to limit their powers and recruit them among the ranks instead of catch and imprison them for all the damages and casualties and fight against them in court for justice. 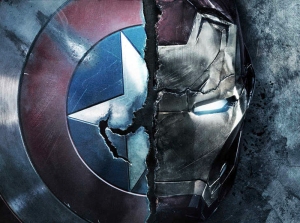 Another brainless event is the highly billed circus show – the 6 man tag team match in airport. Although the movie easily offers one of the best action sequences and almost all the fights are well-choreographed. No matter how much the viewers including myself will laugh, enjoy and get pure entertainment from this almost 10-minute combat but commonsense will fail to understand the highly expected serious intensity of life-and-death fight between hashtags TeamStark and TeamCap turning into series of jokes and apologies while punching each other. Stark’s bringing unskilled combatant schoolboy Peter Parker for his acrobatic and web-sticking skills in this mission itself is the destruction of commonsense. Oh yes one more thing, that airport was empty. *FFS*
A more sensible fighting sequence is the last epic combat between Bucky/Cap and Stark which is full of fury and merciless.
Overall, Cap’s third installment is overall the best MCU movie after Winter Soldier. Among all the intros, my pick is Black Panther. Being the most important movie in MCU for all future movies, the story will forward towards anticipated promises. The conclusions are the beginnings as this universe is a never-ending saga towards long journey expanding to their Phase-IV.
Ratings: 7.8/10
Follow me on Twitter @saminaik_asn