Wednesday Addams punishes the boys in the school who bullies her brother Pugsley Addams. As a consequence, she is expelled. The concerned parents admit her to the Nevermore Academy, a school for the monstrous outcasts where they studied but were accused of a crime scene. Incidentally, the event recirculates with Wednesday’s admission when a creature begins to take lives and she uses her psychic instincts to solve the mystery. 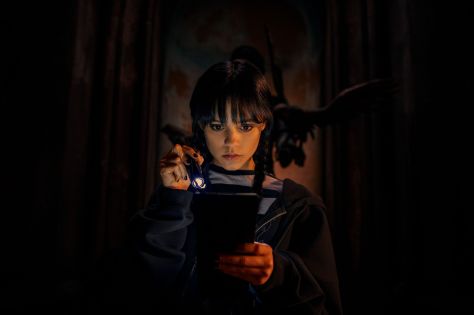 Wednesday hampers a toolbox that was decorated for Tim Burton to utilize when his turn comes to work on the project. The Addams Family and Tim Burton crossed paths but never joined hands which was a sad chapter just like Leo Messi was not lifting the World Cup before it finally happened.

Back in 1991, when Tim Burton was focused on directing Batman Returns, he was approached to work on The Addams Family. He passed on the project due to scheduling conflicts and The Addams Family and its sequel were produced establishing cult status with the audience.

20 years later, Tim Burton was planning to write and direct The Addams Family film, perhaps a reboot, but got canceled due to creative differences with the producers. Then Miles Millar and Alfred Gough acquired the rights, wrote the pilot, and forwarded it to Burton. He became interested and joined them.

It took thirty years for Tim Burton to work and complete a project that looks to me to be the most fitting project he ever happened to work on before. It was a love story that was waiting for its romantic moment to bring the two together.

When the strings are pulled rightly, there is every chance of playing the right notes. Producers Miles Millar and Alfred Gough are well known for creating ‘Smallville‘. Tim Burton has the reputation for many excellent Gothic fantasies. And then his decades-old collaboration with the musician Danny Elfman, the musical notes that ideally fit in Tim Burton films.

With Tim Burton on the director chair, I would have loved to see Morticia and Gomez Addams played by Helena Bonham Carter and Johnny Depp. Catherine Zeta-Jones as Morticia and more particularly Luis Guzmán as Gomez were quite interesting choices. I felt that spark was missing between the two which was quite a thing between Raul Julia and Angelica Huston in those two films. But here, Catherine and Luis looked pretty odd together.

Fred Armisen as Uncle Fester was an imposing choice. Christopher Lloyd‘s Uncle Fester was character-driven and someone on whom the story was centered around. In a quite different setting, this Uncle Fester was more jolly and exciting. I want to see more appearances in the next season. It was a pleasure to watch Christina Ricci in the show who was Wednesday Addams in the films.

My kudos to whoever decided to give the titular role to Jenna Ortega. This has to be the best-ever casting of Wednesday Addams to date. Let me tell you how I think that Jenna did this role better than Christina.

Christina’s Wednesday lacked the body language of a melancholic personality that defines Wednesday. Plus, the writing of her character in the film didn’t guarantee any growth. Wednesday being the center stage of the plot and a tv series of eight episodes at stretch, Jenna had enough time to grow as Wednesday and answer all our questions that were related to her character that was visibly missing in the films.

WHY WEDNESDAY? WHY NOT ADDAMS FAMILY?

I will continue my point about Jenna’s Wednesday because this leads to a whole new level of storytelling. The films heavily focused on couples as well as Uncle Fester but not children. When my generation watched these films back in the 1990s, we had this feeling about the girl that her side of the story didn’t make rounds and that had a lot of potential to grow due to her sadistic personality. I felt the writers of the films missed the chance.

But this chance was smartly grabbed by Millar and Gough with the creme of the plot centralizing the hows and whys of Wednesday’s character. And this is why her parents were almost out of the frame.

The makers installed the character of Enid Sinclair who struggles to befriend Wednesday and there develops a strange bond between a cheerful roommate and a morosely black soul. The makers also built a rigid mother-daughter relationship. The screenwriting of the show also restricted the fan-favorite Uncle Fester’s character to a very brief appearance. Convincing the audience to stick with Wednesday without Fester is a win.

Of course, I have to mention that iconic dance in my assessment. A dance that was actually shot with Goo Goo Muck by the gothic rock legends ‘The Cramps‘ playing in the background but the TikTokers perfectly remixed the dance video with Lady Gaga‘s Bloody Mary and is now called a TikTok Remix of Wednesday Dance. Jenna choreographed the dance herself and the most astonishing fact about the dance is that the dance steps pulled the right strings of Wednesday Addam’s cold-blooded personality. The dance visibly reflected her oddness.

In one of her tweets, Jenna confirmed that gothic rock legends Siouxie Sioux and Lene Lovich, actor Denis Lavant, first Wednesday actress Lisa Loring, and the dance number from Sweet Charity called The Rich Man’s Frug by Bob Fosse were the inspirations behind this dance.

I felt that the finale lost control of the pace and hurriedly strove to a conclusion. But in any case, there is a lot to happen in the future seasons. I really want to watch Grandmama and Cousin Itt.

I have read that Wednesday and Enid may develop a romance in the next season. This is totally out of a syllabus stunt. A girl like Wednesday who lacks emotions and has zero-match with the completely opposite Enid, goes 360 and they become lovers, is not so Wednesday we know of.

Whatever happened to something called friendship? Why cannot the writers try to bring both of them in a bond where they find common grounds to somehow live through. Befriending has been a struggle so far so better to focus on friendship.

Wednesday is highly recommended to the fans of Goth culture and The Addams Family. The films and this show cannot be compared at all. They have different vibes and aesthetics on which different stories have been presented to us.

Wednesday has a lot of adventures or misadventures to excite us. I hope to see a Stranger Things kind of excellent follow-up of the show.