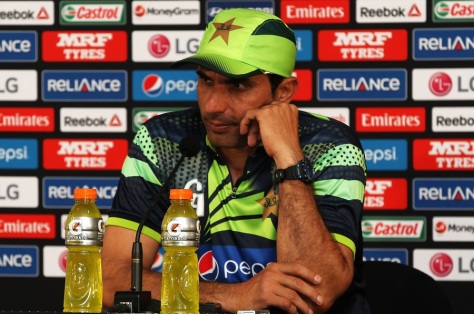 I don’t need to introduce myself because your whole team is too busy in taking selfies and escaping/surviving from the Oceanian ghosts traveling with you in your buses, hotel rooms and bouncy pitches. Although your squad is mentally, physically and morally prepared since the day you stepped in the pacific continent to play on green, fast and bouncy pitches after all your preparations on U.A.E’s very sporting tracks; still I believe there is need of consultancy in strategy making after watching your two highly competitive and thrilling games against India and West Indies.

I have found your whole team in bizarre conundrum and dozen of errors in the most simplest common-senses in team selections, fielding and catching, target-chasing, and running between the wickets prove there is an urgent need of medical team full of neurosurgeons and psychiatrists (and they should be more in numbers as compared to your officials).

After painfully reading my first two paragraphs of paranormal compliments and regards, allow me to present you your 3 most basic comedy of errors you are producing in your vulgar cricketing presentation in this CWC:

Captain is not fully prepared to understand the condition of target-chasing nemesis. He should carefully read the stats of his team’s past performances on oceanic cricket grounds. He should realize that Pakistan has never chased 280+ target ever neither in New Zealand nor in Australia under any captain in ODI history. If losing the toss is your fate, then accept the counterpart’s decision. If you win the toss, go for batting and boost the morale unless the pitch has too much grass and moisture.

After strange squad selection and twice dropping the easiest chance of picking your main weapon Saeed Ajmal in place of the injured, you have to squeeze the 11 players from your 15 to create a formation and build a necessary winning combo. Time of experiments is finished just like preparation for exams before handling the question paper to the student.

The captain/coach has to admit on reducing the risk of reliability over two factors:

This has become the most embarrassing situation when the team indirectly is daydreaming more than being self-confident of rewriting the history in world cup record books. Comparing Pakistan’s initial troubles with the ’92 one is not playing a stress-relief game but inviting ghosts for a combat. You have to take the inspiration from ’92 glory and plan harder to avoid further hiccups.

WHAT SHOULD BE THE STRATEGY NOW!!!!!

Either bat first or second, no matter which team you play against, Pakistan’s XI for the remaining matches should be like this:

#2. No matter you bat first or second, if you have plenty of wickets in hand only in death overs, promote only Shahid Afridi.

#6. Reduce number of dots and regularly rotate the strike

#4. Part-timers are partnership breakers, avoid using them when new batsman come to the crease.

#1. Bring at least 1 slip compulsory for Fast bowler in any phase of inning (remember, the batsman will edge anytime).

#2. Bring at least short-leg for Spin bowler (some turns or rising deliveries are short-leg cookies).

#3. Every fielder should field at specific field position where his feet suits e.g. don’t send your finest slip fielder Younis Khan to the boundary rope.

After sugar-free tutorial, I recommend to take a deep study of what I wrote above.

If you still fail then join ISIS, Gulabi Gang, FEMEN or Suicide Squad.

If you win, then just thank me.