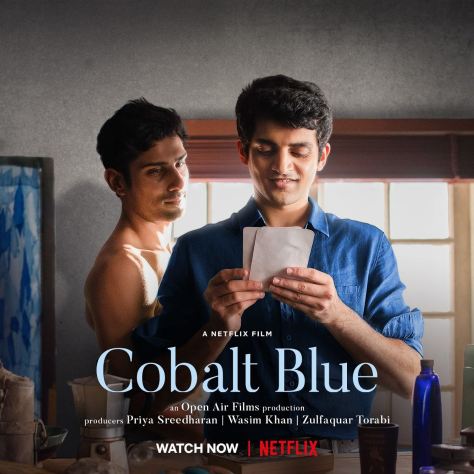 Tanay (Dr. Neelay Mehendale) belongs to a traditional Marathi family and is a story narrator, commentator, and an exciting author who meets a family tragedy when the elders pass away. That leads to emptying the room of the deceased and is decided that they will add a paying guest into their house.

When a handsome paying guest joins the family, Tanay develops an interest in him and starts a secret passionate affair until an unwelcoming event hits the family further.

Cobalt Blue is based on a Marathi novel with the same title that Sachin Kundalkar wrote back in 2003. Decades later, Sachin writes and directs this film. So the creative control of the film is in Sachin’s hands. So that means it is totally okay if he takes liberty from his own novel to use it in the film with as many alterations as he wishes to.

Cobalt Blue is visually striking and very artistic. And when the filmmaking of such films gives cinematography its deserve piece of respect, the detailing of relation starts to look more compelling. This is a coming-of-age film that defines the first strike of love spell with authenticity. The film’s major win is the chemistry, two souls melting with eroticism and finding opportunities to quench their thirst. The depiction of rawness in the love affair is terrific.

Sachin Kundalkar has made sure that quality literature plays an important role as Tanay is fittingly a dreamer who is excited about sharing beautiful moments with the paying guest.

When I watched Cobalt Blue, I felt as if I am reading Arundhati Roy‘s The God Of Small Things. So if you are also getting the same vibes, that means Cobalt Blue has an excellent narrative design.

Cobalt Blue tests patience because, with a screen time of around 115 minutes, this film looks quite lengthy. And is visibly slow. Prateik Babbar was average but Dr. Mehendale gave a terrific performance.

If you are willing to watch a coming-of-age film that has quality writing about sexuality, I’ll suggest checking this film on Netflix.