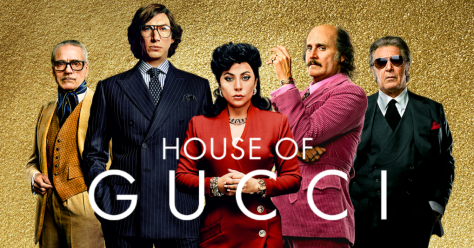 As the title gives the precise indication, Ridley Scott‘s House of Gucci is about the legacy and incidents that occurred in this rich family that led to the downfall and disgrace to their name. With the ensemble cast of Lady Gaga, Adam Driver, Jared Leto, Jeremy Irons, Al Pacino, Jack Huston, and Salma Hayek, the film with a fair portion of historical accuracy indicates that the film was set for a definite showdown.

What marvels with the film is the consistent pace at which the screenplay holds firmness and makes the actors mesmerize with their quality performances. They all were exceptional. Their roles were well adjusted in their given screentime according to their weight and importance of them in the story.

As many major incidents were directed in the right tone, there do are some issues where I felt that Ridley Scott lost the edge or preferred theatrical license. The most critical concern was Jared Leto as Paolo Gucci. Couldn’t understand why Leto was chosen for the role and all this hard work on prosthetics transformation. Only Ridley can explain the vision behind believing that Leto will do justice. Leto’s Paolo Gucci is a strange comic relief who is like a fool or a jester in the Middle-Age royal court. I could not take him seriously. I felt as if this was some parody or his imitation of Paolo’s foolishness. Not sure if this was disrespect but I had to question myself if Paolo Gucci really was a nincompoop. There is no doubt about Leto’s performance as a funny Gucci being entertainment for the audience, he did act well. But, did Paolo carry the same traits, or was he deliberately put to insult?

Another concern is the film’s length. Because the pace of the story was consistent, a lengthy film made the watch on the wrist tickly-ticking. To my understanding, a story like House of Gucci perfectly fits for a limited series format rather than a 158-minute saga. I think FX‘s American Crime Story would have done a favor to its audience way more than this film. Despite being a quality film, a school of thought may construct to theorize that the dramatizing of around three decades with these characters in a single film would not develop that much storytelling.

I am disappointed with the Oscars, how come Lady Gaga is not nominated for the Best Actress? This has to be her best performance. The role of Patrizia Reggiani in the house of Gucci was a bomb that exploded with many consequences. And Lady Gaga’s execution was so well-crafted that the viewers will get irritated with her for everything she stood for. In the second half, she will be on everyone’s nerve, and would love to see her die. And this is what performance is about. Play a good or bad character in a way that the audience treats the actor in the same manner as the character himself/herself.

The other major actors did well. Adam Driver continues his form. Jeremy Irons had his moments when his character gets extremely sick. Al Pacino’s prowess in his artistry was reflected when he returned from prison to lose his mind over the incidents he never came to be aware of.

House of Gucci is a favor to the fashion enthusiast and the history-digging audience who are interested to know how the mighty fell and lost control of one of the greatest luxury brands.