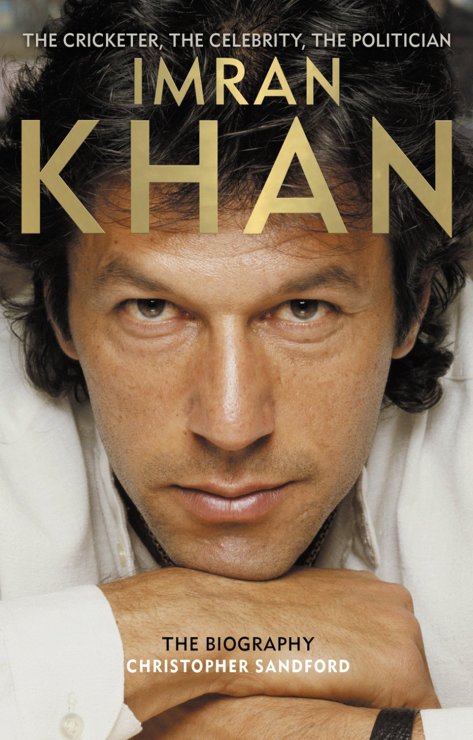 The batsman was yet to understand when did the ball release from his hand and when it reached the stumps, all he realized was off the gloves, bat pressed in the wet armpit and there was the pavilion.

Shall I say, cricket playboy? Shall I say every dream girl’s HBK?

When he was bowling with a breathtaking run-up, he looked like Tony Montana firing ‘Say Hello To My Little Friend‘.

Born in Lahore and settled in Mianwali. Blood of a Pathan and rooting from the Niazis and the Burkis. Descendant of Pir Roshan and ex-son-in-law of Goldsmiths. Alumni of Oxford and Chancellor of Bradford. The winner of the World Cup and builder of the groundbreaking cancer hospital. Two sons from Jemima and a daughter from Sita. Imran Khan is the Cricketer, the Celebrity, the Politician and that’s the book I just finished reading.

This book was written and published in 2009 by arguably one of the finest biographers, Christopher Sandford, who also wrote biographies of many great legends like ‘Primitive Tool‘ on Mick Jagger in 1993, ‘Edge of Darkness‘ on Eric Clapton in 1994, ‘Kurt Cobain‘ in 1995, ‘Loving the Alien‘ on David Bowie in 1996, ‘Satisfaction‘ on Keith Richards in 2003 and ‘Polanski‘ on Roman Polanski in 2007 in the past couple of decades.

Published by Harper Collins, comprised of 402 pages and 10 very interesting chapters, Sandford’s pen proved no ink miscarriage or bleaking malfunction as the man in the limelight was properly life-summarized. The book is like an exclusive documentary or the making of a legend. While reading the pages, you are sensing some footage playing in your clouds of imagination.

Sandford put three years of his efforts to shape this book from 2006 to 2008. During these years, he conducted many interviews with many personalities linked/associated with Imran’s life and careers like Mike Brearley, Geoff Boycott, Javed Miandad, Pervez Musharraf, and Jemima Khan-Goldsmith. He also collected the cricketing sources from different cricket administrations, Cricinfo, and county clubs. Many of the incidents and quotations have been picked from various books including Imran Khan’s The Autobiography, All-Round View, and Indus Journey, plus various books written on/by Botham, Miandad, Atherton, Sobers, and Parvez Musharraf. The author also conducted his three most prominent interviews with Imran Khan in 2008.

I had read Javed Miandad’s Cutting Edge where he reflected on his cricketing career and dirty games played behind the scenes. So after reading that book, it was easy for me to now understand Immy’s take on all this. The difference was literature; Miandad’s story flows like a river but Imran’s corner details more fish in the river.

Sandford depicts his deep research towards Pakistan cricket and the first two chapters will give you an idea of how good he is in describing the gear-shifting of Pakistan cricket from the 50s to the 60s. In these chapters, enter the central character and his family tree and relatives are penned in detail.

Even the smallest account/incident means a lot for the readers to know the iconic leader as he once bribed a policeman in his teen-hood and enjoyed ammi’s scolding. While his cricket-level moves with his education from Quaid-e-Azam Trophy to the county cricket, the political environment in the surrounding proceeds like East Pakistan partition to Bangladesh and Zulfiqar Ali Bhutto regime.

The third chapter is his account of his university-level and county cricket, the beginning of his international cricket career, and his life in England. The fourth chapter depicts life in Sussex county, the political crisis of the late 70s, and furthermore tours including the 1979 World Cup. And the chapters proceed on and on.

The readers will exhume with the excitement of enjoying reading about his high-profile affairs with many ladies that prominently include painter Emma Sergeant, fashion guru Susannah Constantine and former German VJ of MTV Europe Kristiane Backer. The controversial case of Imran’s affair with Sita White is sensitively not protracted as I was expecting. But he is never bothered to call her ‘Drama Queen’.

The 1992 World Cup story is the one that will bring that josh-e-junoon page by page as a magnificent comeback is enthralling when you read it match by match. In all cricketing tours Imran participated in, with obvious picking, it is the great West Indian team against whom Imran was always concerned.

Imran’s philanthropy in the book is adverted towards the foundation of integrity and prosperity with the qualities Imran has been assembled. The building of Pakistan’s first Cancer Hospital is one of the achievements by Imran, the inspiration came after the death of his mother, Mrs. Shaukat Khanum, from cancer. For the purpose of laying the foundation and shaping it into functioning, Sandford has penned sporadically Imran’s effort of fundraising from campaigns, shows, parties, exhibition games, and earnings from his playing career.

Any reader like me will find a wide range of descriptions of his relationship with Javed Miandad. In many situations, Miandad’s book Cutting Edge has been used as an instance where indirectly the (mis)understanding between the two is reflected and perhaps becomes debatable. Most alarmingly, when it comes to the strangest decision of Imran’s captaincy of declaring the inning when Miandad on the crease is mere twenty runs short of a triple century. The arguments don’t match and I feel scratching my head after knowing Imran’s reason for the declaration.

How can the biography of Imran’s life be without the biggest happening since his cricketing career? Entry of Jemima Goldsmith and launching of his political party, Pakistan Tehreek-e-Insaf (Pakistan Movement for Justice). From here, when more than half of the book has been read, the most critical writing pledges. Sandford surpasses the expectation of translating Imran’s most critical and beyond challenging life into a mind-frame of footages. Many many aspects are surrendered to throw in Imran’s way like rivalries with politicians Altaf Hussain and Nawaz Sharif, General Musharraf’s imposing of martial law and beginning of his dictatorial regime, a disturbed marriage with Jemima, libel case against Ian Botham and Allan Lamb, and failure in general elections.

Politics has no bound from here, as he majorly targets former President Parvez Musharraf and his government for being a US ally, and destroying Pakistan’s welfare for many incidents. Cricket fixtures continue to echo in all this. Sandford does increase the volume of Imran over major incidents that occurred in Pakistan cricket like the 2003 World Cup, India’s 2004 tour of Pakistan, and the Hair-Inzamam controversy.

The book from all aspects is a complete Imran Khan book. The first impression of the reader surely comes as a sports biography but the title is enough to convince you that this is the ultimate book where Imran plays three different roles, not only as a cricketer but also as a celebrity and politician. The book is absolutely frank about his good deeds and wrong-doings. This biography is absolute and worth reading for all Immy-lovers. The reader will be moved while moving toward different phases of his life. Visualize the footage of the great ironic legend while speaking its pages.