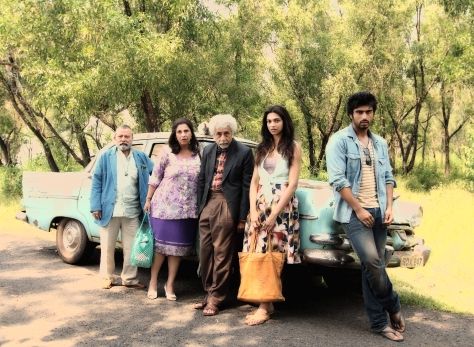 Your favorite dish is in your plate right at time, only an ass will avoid eating on time…

Before the curtains are raised, the viewer is subjected to tell the reason of watching the movie… exactly my words!!! Finding Fanny!!! Imagine yourself in your sixties as postman by sour fate. When you were a boy, you loved someone with sheer madness and posted a chitthi to her. But 46 years later you somehow realize in your sixties that the letter was never delivered and you lived your 46 years in impression I mean depression that she read your chitthi and rejected the proposal. Oh boy!!! you definitely will cry out loud…

Eyes of Pocolim ope, introduction of core characters begin. Postman Ferdie (Naseeruddin Shah) will go on quest, his most caring friend Angie (Deepika Padukone) will accompany him. But they don’t have vehicle. Angie will ask for favor from his childhood friend, mechanic Savio (Arjun Kapoor), to borrow her a car which he fixes. But car is under ownership of artist Don Pedro (Pankaj Kapur) who is mad in love with her mother-in-law Mrs. Rosie (Dimple Kapadia). Surely a life-changing road trip is expected whether the old man finds his Fanny or not.

First and first of all… it will take the whole duration of movie to find out if the movie really belongs to Bollywood because of its extremely rich portray of realistic sketching of realism and technicality of film making. No doubt, Homi Adajania had presented rich colors of movie-direction in his debut movie ‘Being Cyrus‘ but after watching ‘Finding Fanny‘, one must say he has mastered his directional skills.

Why ‘Finding Fanny’ is so fresh and richly entertaining to viewers?? The biggest reason is the effort of writing its screenplay. Homi spent a month in village Salvador do Mundo of Goa and researched/learnt its culture and local Goan Catholics. Then rest of draft-work plus dialogues and screenplay was done by Kersi Khambatta who came up with this FF story, lengthy enough to shape it in novel which will be released this year.

To call ‘Finding Fanny’ a comedy movie will be an error, even romantic drama won’t fit in genre. I am confound but movie is an absolute art of realism because every aspect related to movie is touchy and pure natural whether we observe emotional tragedies, rudeness of a lover boy, quest of an old man for a hungry 46-year-old lost love and much more… 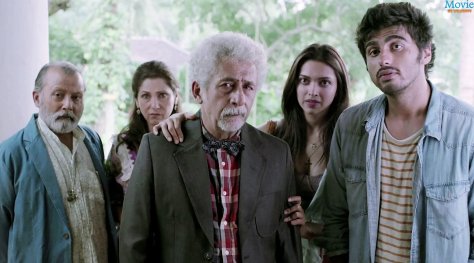 Let me go to that level, Homi’s art of making ‘Finding Fanny’ will remind the viewer Wes Anderson‘s. I see auteurism and story-sketching is very narrative (more than Deepika’s narration). Movie is multi-lingual. Super-fabulous work by one of best cinematographers, Anil Mehta (Lagaan, Veer-Zara, Rockstar) and one of finest movie-editors, A. Sreekar Prasad (Dil Chahta Hai, Kannathil Muthamittal, Guru).

With a budget of mere

15 crore, the entire shooting was done in different villages of Goa and completed in only 36 days. Costumes used in the movie matches the demand of locality, designed by Anaita Shroff, Homi’s wife. A very decent and larger than life background score by French musician Mathias Duplessy. Many hilarious scenes will rib-tickle you specially the interval scene :P Arjun-Deepika on-screen chemistry is more than natural and there is no escape when fire will rise below the tree in the shadows of intimate love. Dialogues have rich taste of sensitivity where serious anger of old lady bursts the lover boy or an artist speaks his heart out to the old lady…

Speaking of bravura performances, every core cast is exceptional. With grand acting gurus like Naseerudin Shah, Dimple and Pankaj Kapur involved, young bloods like Arjun and Deepika gave a resounding action. It is really hard to pick one out of five main characters, they might top with their prominence.

If Naseer sahab is a whined and hypnotized lover, then Pankaj ji is Shakespeare of words, above that Dimple madam is absolutely bumbastic ;) To a major surprise, real-life brother-in-laws, Naseer and Pankaj, shared the screen for the first time in 28 years (Jalwa 1987). Both never shared screen in Maqbool (2004).

‘Finding Fanny’ is a healthy entertainer and absolute blend of emotions and expressions with a poetic soul. Surely one of finest movies of 2014 and absolute cult of rich chocolate.