Trevor Bingley is a rookie housesitter who is assigned to a high-tech mansion for a few days but to his bad luck, a bee begins to circulate around him and enters the property. After the owners hand over their place to Trevor and leave, the latter struggles to get rid of the bee that jeopardizes his work.

Netflix‘s Man vs. Bee has to be Rowan Atkinson‘s grand comeback to the comedy-drama on television since The Thin Blue Line he did for BBC back in 1995. Rowan Atkinson co. created this show with William Davies, the screenwriter who wrote Johnny English trilogy. So the artistic chemistry is there with David Kerr on the director’s chair who worked as a director with both of them in Johnny English Strikes Again.

Man vs. Bee is a fresh idea for a comedy. This is like someone showed up in a meeting with a plan that, to everyone’s surprise, works and suits well. No forced representation, no lovemaking, just an old-school comedy. Rowan Atkinson as usual displayed his slapstick magic that ages well with the audience. There is still Mr. Bean inside him that teases him to present his usual misfortunes. And the impressive part is that nothing looks unnatural, no portion of the jeopardizing moment is forced at all. The timing of the unfortunate incidents one after one defines a person’s worst Monday to begin with. 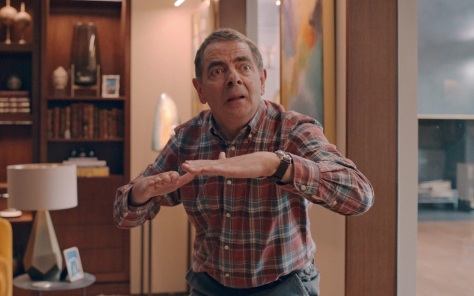 Another element of superb writing is the application of old-age or simply non-rich people struggling to settle themselves in a lifestyle that is so unusual and futuristic to them. The complexity of living in a high-tech residence is really well written. The exaggeration is sublime. The problems Trevor senses never end from the first day, it is the hardship of understanding such rich domesticity that leads to misfortunes, not only the bee.

Perhaps Trevor could have gotten rid of the troubling bee if it was a simple apartment. But then, the application of realism gets compromised for the sake of fun and laughter. Man vs. Bee does defy logic that questions realism. A few questions and Man vs. Bee cannot help escaping from the plotholes or obviousness. When the bee made Trevor break the first showpiece, why didn’t he inform the owners? Fine, he panics, and he recently got the job. But when he takes the dog to the vet, why doesn’t he inquire about catching a bee? And who in the right state of mind will detonate in the residence? Perhaps he gets so lost that he cared nothing and even puts the house on fire? Maybe this is an exaggeration to its peak but certainly, logic failed for the sake of comedy. I just felt that these are some portions where the writing and humor looked compromised.

One questionable part of writing was not killing the bee in the microwave when he had the chance. This can be theorized from several angles like sympathy with a living creature after spending some time with it for good or bad reasons, or being foolish by forgetting to close the glass sliding door, etc.

I think it was a smart move to divide a simple comedy into a maximum of 12-minute episodes. Maybe Trevor’s battle with the bee would have looked boring or silly if this was a one-hour film. But in any case, I believe that Man vs. Bee makes you think about those small moments that build nerves if you take this way too seriously. It was just a bee that happened to enter with Trevor and made the mess. Perfect timing for misfortunes and embarrassment that offers the finest displays of remorse and distress none other than Rowan Atkinson can master around.

A very funny take on mistakes, Man vs. Bee has a remarkable discomfort to laugh at.