“The modern-day journalists and the media professionals would not have even imagined the difficulties and the hiccups that I and other reporters of my generation had endured during the 1950s and onwards.”

Since the 1960s, Qamar Ahmed, the author of the book, has covered more than 450 tests, 700 one-day internationals, and nine World Cups (the first eight and then 2019) as a journalist for many agencies like BBC, The Times, The Guardian, The Daily Telegraph, AFP, Reuters, just to name a few.

The cricketing journey of the author is not about the history of Pakistan cricket but international cricket. It is a passion that leads you to eternal respect that you earn after a love affair with the game.

Far More Than A Game is divided into thirty chapters that are spread over almost 300 pages. Most of the details are the author’s first-hand experience due to the nature of this book being autobiographic with an assistance of a few national and international books.

The reading of this book is easy, comprehensive, punched detailing with straight incidents from different timelines, and with complete liberty of his opinions.

This autobiography is pretty personal and perhaps I can say the book is a rollercoaster ride about Qamar Ahmed’s life. By latter, I mean that he is totally open to all the parallels if he feels to speak about and thinks of no consequence about a series of questions he may be asked about his life. And I liked the nature of his openness that describes his personality and the autobiography being put to the best use of it. The reader won’t feel the sensationalism of the literature but the admittance about his life that he moved on but were vital to being written in the book.

The author depicted his disappointment in General Zia-ul-Haq’s leadership which was so disturbing to him that he refused to shake hands at a party. There is an entire chapter (no.22) about the two incidents that soured his relationship with Imran Khan. The writing of this chapter clearly indicates an agitation that should be addressed to the reader due to the fact that this eighteen-page chapter is surprisingly the lengthiest of all the chapters he wrote along with another chapter about his first-class career. I do not question the author’s motive but I am writing my honest observation about the writing of the book that this particular chapter was stretched as compared to the other interesting chapters that required more detailing than this. If this chapter had eighteen pages of details, then I reckon that a chapter about the road trip from London to Pakistan (no.14) deserves a separate book.

There are several personal accounts that help in shaping the authenticity of an autobiography. In one chapter (no.9), he writes about a life that was wasted in college because his parents wanted him to pursue a career in science rather than wanting him to choose his own career. An octogenarian passes an important piece of information to the readers about his younghood that his life decisions were made by his parents that succumb to a traditional parental syndrome in South Asia which has been emotionally attached in this region for quite a long time. Deciding about the life of a kid is understood but someone who passes his childhood and enters into college hood has the right to make his/her own decisions. The author addressed this matter, advocated liberty, and encouraged the readers to follow their passion rather than a silly tradition.

There was a French girl he was seeing in 1965 who was in England to learn the English language (no.11). Only a few paragraphs were written about her but nothing much. I liked the idea of keeping it short just like a brief series of meeting in life. It is like a gust of wind that blew from one direction towards the other once in life. It is a special mention of interest people at old age remember despite the time has passed around fifty years to that.

“Never for one moment as a schoolboy then I had even the slightest of inkling of what the destiny had in store for us and what was to come which would not only change the life of my family and that of many others and that of the country itself which would influence also the course of history.”

Far More Than A Game is a fascinating read for more than one reason but the most significant point to consider reading this life story is that the author was one of those few Pakistanis who got European, especially a British exposure to a socioeconomic life that fetched a lot of international diversity. Living a life in a multicultural country develops individualism and helps in socializing with people from different diversity. So that worldly experience fetched a lot of stories and incidents that happened with the author.

And then the author belongs to the greatest generation who experienced the partition of India. A lifetime that the next generations can neither feel nor imagine the suffering. So his personal account from the earlier chapters is a source of real history that the readers are unable to find in the books that are provided by their academic authorities.

The book starts with a sorry tale of partition and his childhood memories in the first chapter followed by a gripping narrative of his family’s migration from Chapra to Hyderabad. There are two chapters that are history lessons, one is about Hyderabad city and the other is about his ancestors, a knowledge that was treasured to him by his uncle from Mairwa, a city in Bihar state.

One of the luxuries in the field of journalism is meeting important people from different walks of life, and so did the author. Qamar Ahmed missed no chance detail in separate chapters about his once-in-a-lifetime moments when he met Kerry Packer (no.15), Sir Don Bradman (no.16), and Nelson Mandela (no.21). Touring India was mostly personal for Qamar Ahmed due to his origins. But he holds the distinction to have met with the Indian film industry’s greats. Imagine people in those times like the author getting the honor of meeting the great Raj Kapoor at his residence where along with the Kapoors, they also get to meet Dilip Kumar. Meeting two of the biggest superstars of the golden age at the same place is surely one of the best memories of a lifetime.

Far More Than A Game is not only about history and the people he met in his lifetime, it is also about some very serious highlights that were needed to be addressed that occurred in the last chapters of the book. One was about Salim Malik and the kind of world he entered to regret for life.

There is a special place for Indian cricket legend Sunil Gavaskar in his heart and the twentieth chapter is dedicated to him to talk about some situations which may have gone unheard of. It was shocking to understand that Sunny was stopped by the MCC staff twice to enter the Lord’s cricket ground. The details about these incidents are covered in the chapter.

A much-needed drive to address some controversial incidents like the Gatting-Rana altercation, the Inzamam-Hair ball-tampering controversy, the bus attack on the Sri Lankan team, etc through his experience made rounds in the book.

The twenty-eighth chapter is full of funny and priceless moments that the readers will read with keen interest. I like a few of his moments like the historic moment of South Africa’s re-entry into international cricket, his brawl with a mugger, mistakenly calling Alec Stewart ‘Hansie’, a cricket manager asking to sacrifice a black sheep, and many more. If I was sitting along with the author when he called Alec Stewart ‘Hansie’, I would have seriously couldn’t stop myself from laughing my ass out. It was a really funny and ‘innocent’ blunder. 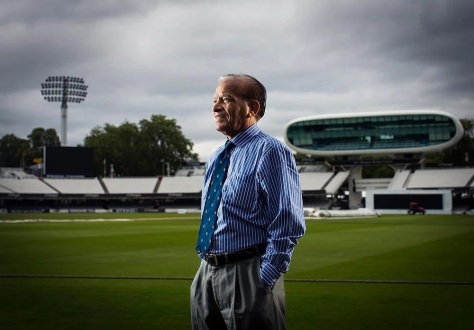 Arranging and compiling chapters in a book, especially in autobiographies are very vital. I have read a few autobiographies and being a bibliophile, I have this idea that there are two different arts involved in shaping and publishing a book; one is writing it as a whole, and the other is giving the whole writing the best possible finishing in a way that reader is captivated to read a life story.

I will be a little critical here about the arrangement of the chapters. As per my reading experience, Far More Than A Game didn’t conclude fittingly. I think the thirtieth and the second-last chapter where he wrote about the evolution of sports journalism and the use of technology, would have been the perfect end with a personal message or some inspiring words for the readers.

“When checking out to proceed to Calcutta (Kolkata) for the sixth and final test of the ongoing series between Pakistan and India, I requested the receptionist at the hotel for my bill.

The reception officials gave me a pleasing smile to say: “No bill Sir, we know who you are. We have been told by Dr. Hari about you that this was your house before you left for Pakistan as a schoolboy.””

The first three chapters in the book highlight in detail about his childhood, migration, and painful history. And then in the next chapter, he remembers his return to India. That fourth chapter needed to be distanced from the previous chapters and arranged in the middle of the reading.

With a gap of a few chapters and crossing the time to the late 1970s, this reunion moment would have melted the emotions more. It is my opinion that talking about the reunion in just the fourth chapter of the book was way too soon.  The editor or compiler of the publishing company should have considered giving the sentimental feel to the reader by arranging this chapter somewhere far from the earliest details.

The fourth chapter has an amazing detailing of reuniting, giving the readers a staunch view that partition gave us a lot of painful stories and reunions of a lifetime. Imagine if hatred had its say and those landlords had killed Qamar and his family? There would be no story to tell us, there would be no legacy of cricket journalism and broadcasting, and there would be no reunions or faith in humanity to hope from those tragedies.

“Far More Than A Game” is the anatomy of cricket journalism, a pocket dictionary to the evolution of cricket, a time-traveling diary that settles nowhere but gives you an experience of a lifetime. A cricketing life to celebrate, thank you so much for your lifetime contribution and service to this beautiful game.

“I always believed that if you are good with people they are good with you and in turn respect you for what you do. That is how I thought a journalist should be when dealing with a story or with people related to it.”