Previously, I wrote comic book reviews about the first two volumes of Gerard Way and Gabriel Bá‘s The Umbrella Academy, Apocalypse Suite and Dallas. The Netflix show with the same title that Steve Blackman ran and wrote had smart writing for any adaptation, complex but a method that suits the television audience and to a razor-edge point where the viewers can be convinced with.

The third season detailed the Sparrow Academy which was depicted by the end of the second season as a dramatic cliffhanger. It was more shocking for the comic geeks because the Sparrows are not really much introduced to comics. I happened to read the third volume, Hotel Oblivion, as the title gives me or every one the precise impression that the third season is based on this book which is true but not entirely. The Sparrows show up to the Umbrellas at the end of the book just like the show’s second season as mentioned above.

That makes Steve Blackman’s writing the show in a very different direction really cool. We buy what we watch and there surely is a behind-the-scene geekery-geekery-gock discussion about the fourth book proceedings to refer to on the television. When will the fourth book release, no idea but Steve Blackman’s idea about the show’s fourth season will now test him. Because so far he has done a really good job.

One major difference between television and comics is that Hotel Oblivion is a hotel in the former but a prison in the latter. A prison that is designed by who else than Sir Reginald Hargreeves himself for the most dangerous villains his babies have fought and defeated. There is no chance of escaping this prison unless they use a teleportation device, televator. But utilizing the televator will also not be enough because Scientific Man monitors Hotel Oblivion from space.

Scientific Man is The Umbrella Academy’s Doctor Manhattan with a better costume. While reading the fifth issue, surely his appearance to every reader like me was a surprise. He entered the scene like a messiah or a Superman. And I am not understanding why was this character not involved in the latest season. Or did he show up if I am mistaken?

The stories of both the television and the comics are extremely different. My whole enthusiasm to read Hotel Oblivion to broaden my understanding for the third season altered because, in the comics, the Umbrella Academy fights against the Murder Magician, a hypnotist, and Obscura, the jewel thief. Both of the villains manage to escape the Hotel Oblivion.

Speaking of the hotel, there is no mention of Hotel Obsidian in the comics. Hotel Oblivion is a one-dimensional prison built by Hargreeves to torture his villains. But the third season, I opine, edges over this idea in writing the third season. Steve Blackman introduced the concept of Hotel Obsidian, a hotel where Klaus used to get drunk more often. When the Sparrows show the Umbrellas the exit door, they take shelter in this hotel and later on discover the mysterious routes that take them to a bizarre version of Obsidian which is Hotel Oblivion.

Just like in previous books, Hotel Oblivion maintains dysfunctionality in the siblings. They are again scattered. Spaceboy is walking on the streets of Tokyo. Number Five is a hired assassin. Vanya again has a shorter appearance like Dallas and continues her physical therapy. But this time she is interesting to read when Vanya and her mother have a deep conversation in the fourth issue where the mother explains what makes her daughter so special.

Hotel Oblivion also deserves to be praised for developing the understanding of Hargreeves. A thought about Hargreeves creation to be a blessing also juxtaposes his vision on a broader scale whether he ended up being a villain after the revelation of his prison plan that happened after his death.

Just like the previous two books, the main issue covers and the introduction of the issue names had impressive drawings as well as some portions of the stories. Gabriel Bá’s illustration really reflects a darker image of the happenings. Notice his detailing in the fifth issue when all the villains march together. Or the nuclear reaction in the final issue. The comic-book partnership of Gerard and Gabriel is the key to The Umbrella Academy being an exciting brand to follow.

I think the third book was an offshoot to step into major parallels. The seven-chapter identity crisis story gave new meaning to thinking about renewing a universe. It was an interesting idea. Hotel Oblivion is completely different from the first two books, it is like waking up during a road trip to experience a totally new world. 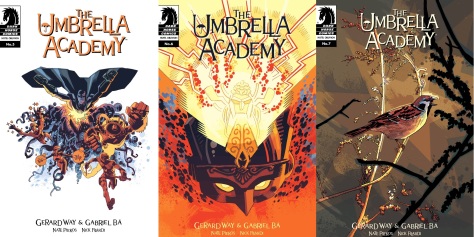 I found this comic-book review about Hotel Oblivion very genuine. Watch and listen to them.

Two time-traveling serial killers Hazel and Cha-Cha are on a quest for Number 5 (The Boy) whereas Number 5 lives fifty years in the future where he gets training by Shubunkin Goldfish (Carmichael) and later on an assignment to assassinate President Kennedy. 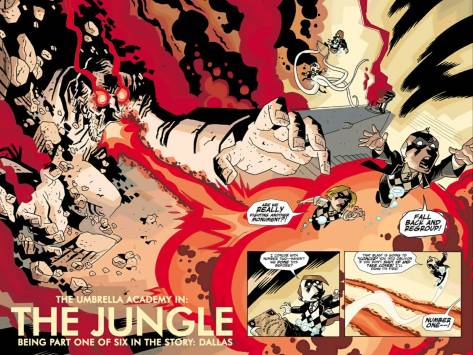 The Umbrella Academy was abstracted by the leading vocalist and co-founder of My Chemical Romance, Gerard Way. In 2007, Way completed the writing and visual artwork of the first comic book limited series ‘Apocalypse Suite‘ with the cartoonist Gabriel Bá. Dark Horse Comics published the graphic novel and was first presented in the annual promotional event Free Comic Book Day (FCBD) the same year. The first issue was immediately sold out and indicated staunch interest amongst the readers. By next year, this graphic novel won Eisner Award for Best Limited Series.

This storyline, Dallas, is second in line, which began to run its issues in 2008, exactly nine months after Gerard Way and Gabriel Bá concluded the first chapter, Apocalypse Suite. Just like the predecessor, Dallas also has six issues but the writing elements are darker and more complex than Apocalypse Suite. And it is the upgrade over the first chapter that the tag team of Gerard and Gabriel have improved the method of storytelling to the readers with a lot of potential bettered for Number’s character.

Kraken, who is Number 2, is also a welcoming signal who looks physically visible to lead the perplexed team. The readers may get disappointed by not finding much presence of Vanya in Dallas as compared to Apocalypse Suite. But I sense it was a risky move to continue the story without not much contribution from Vanya who lies on her bed after what she has been through in the first chapter. But there are moments in one of the issues to read where Rumor holds grudge against Vanya.

The fifth issue is mostly based on the Vietnam War and has impressive writing. In fact, the one parallel that bridges both the chapters is the marvelous take on the dysfunctionality of the lost children under the Umbrella Academy. The reader must have to keep his/her hours passed on the Netflix version aside because these two chapters were published almost ten years before what the global fanhood hooked up with on the television.

I must admit that the writers of the Netflix adaptation did some hard work in giving the idea of presenting the original work to the television in the rightest and most acceptable direction. The elements of both chapters are mixed to construct a plot that looks good enough to move on. I thought Hazel and Cha-Cha were created straight on television until I read Dallas. Because they didn’t appear in Apocalypse Suite.

I think Apocalypse Suite will be remembered more than its sequel because of the plotline that inspired the first season of the show. But writing-wise, Gerard-Gabriel have matured their storytelling in Dallas. Surely, an important read one cannot miss at all. The next in line is ‘Hotel Oblivion‘ which started to publish the issues in 2018.

If you want to read/listen to the commentary about The Umbrella Academy: Dallas, I recommend you follow this link. 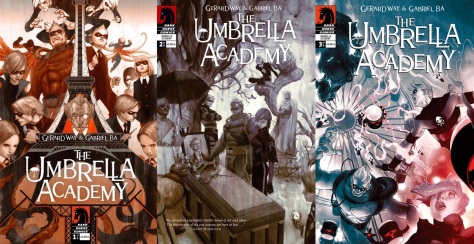 A space alien Sir Reginald Hargreeves, a.k.k.a The Monocle, is a world-renowned scientist and a wealthy entrepreneur on earth. He adopts seven superpowered children who raise them as superheroes. They are called The Umbrella Academy. Years later, after failing a mission in Paris, they split. Twenty years later, they return after they receive the news of the death of their adopted father, The Monocle. 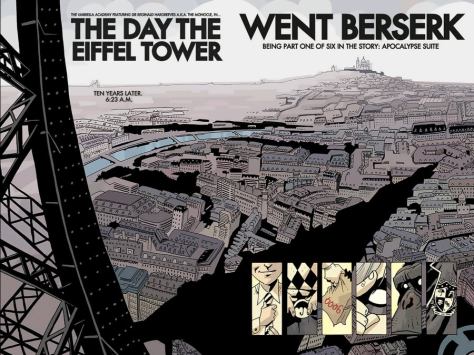 The Umbrella Academy was abstracted by the leading vocalist and co-founder of My Chemical Romance, Gerard Way. In 2007, Way completed the writing and visual artwork of the first comic book limited series ‘Apocalypse Suite‘ with the cartoonist Gabriel Bá. Dark Horse Comics published the graphic novel and was first presented in the annual promotional event Free Comic Book Day (FCBD) the same year. The first issue was immediately sold out and indicated staunch interest amongst the readers. By next year, this graphic novel won Eisner Award for Best Limited Series.

There are six issues in the graphic novel and each consists of 23 or 24 pages. Gabriel’s artistic work and characterization will somewhere remind the reader of Frank Miller‘s work on The Dark Knight Returns. The drawings are not really that captivating but I liked the sub-cover art pages of the issue titles. Yes, there are some pages that need attention to the detailing like Pogo testing number 5 and news reporting in the third issue. Or Kraken shutting down Vanya when she returns. I liked Vanya’s character development where it reflected that she wasn’t taken seriously and no one cared about her. Those two dark pages of music notes were quivering. Pogo’s soft corner for Vanya was also highlighted.

Twelve years later, Netflix adapted and created the streaming television series. In the first month of release, the show was watched by 45 million viewers and became one of the biggest hits of the year. The show achieved cult status and critical acclaim thanks to well-executed screenwriting. 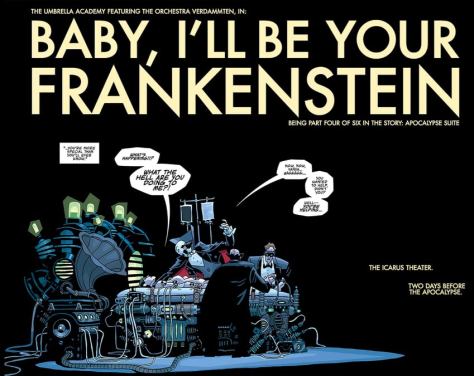 This is not strange that the adaptation gets a license to make changes for visual dynamics to captivate the audience but I felt the sources taken from Apocalypse Suite were modified and to some extent, looked acceptable. Just, for example, Vanya’s characterization; in comics, Vanya is powerful when she unleashes her powers by playing violin but in the show, she uses any sound wave. Ben (number 6) is almost invisible in the novel but has a fine supporting role like any of the other six. Ben and Klaus (number 4) are good friends in the show and are comic relief and fan favorites. So observing these two changes, I think no one will have an objection.

Yes, there were elements that raised the eyebrows like Klaus and Vanya were LGBTQ+ characters and were not in comics. Maybe that’s a Netflix thing and this Netflix show is no different in making those choices for the established characters.

But I think Apocalypse Suite is a very interesting beginning of the series that continues its story in the next three novels, Dallas (2008), Hotel Oblivion (2018), and Sparrow Academy.

If you are interested to watch the commentary about the history of The Umbrella Academy, I recommend you watch this video.