A wealthy secret organization invites scores of participants who suffer financial crises and heavy loans. The participants eagerly join and are sent to a secret place for a few days where they have to accept the rules and play six games to win the jackpot. Little do they know the price they have to pay to end their financial miseries. They have zero clue about the horrors they have to confront.

Yes, there have been similar plots before like The Hunger Games and The Maze Runner but this South Korean tv show Squid Game cannot be compared for having similar elements. One, the former shows were adapted from their novels but the latter is created by the writer and director himself, Hwang Dong-hyuk. Plus the script of Squid Game was developed back in 2008 when the creator himself was in financial crisis too. So let’s assume that the foundation of this show was laid by his own lows. Indeed, the stories are gritty, moving, and compelling when you have bad times in life. Would the show have worked if produced in 2008? A kind of million-dollar question applicable in George Lucas‘ shoes when Star Wars was struggling to exist after Star Trek happened a decade ago.

I think Squid Game qualifies to be considered a complete source of entertainment where the games, the anticipation, the drama, and the suspense was thrilling, mesmerizing; and in all honesty, the show built a tremendous harmony of dark elements and forced humor in the writing. Just super brilliant work in the production design, contrasting colors of the interior so compelling and you are in some hypnotic illusion when the synchronized ladder climbing from different directions trying to reach the event.

The show is meeting immense global popularity and the kind of plot is hooking millions of viewers around the world, the story must also be subjected to observe how the ugliness of realities are made so warmly welcomed. Squid Game is easily one of the darkest satire on social capitalism on the global level. The highly rich people having fun of witnessing the poor turned into evils and murderers for the greed and hunger for money. Exaggeration of childhood games placed on adults becoming some harmless flying birds for the hunting season.

The world-famous music, ‘The Blue Danube‘ has found a new place in history and will be remembered for a reason. I must also admit that it wasn’t certainly perfectly crafted writing at all. Dong-hyuk did miss some portions that he should have taken into account. The heaviest of all criticism rests over lacking character developments. For example, I wanted to know the making of the Front Man. There was so much potential in the character but didn’t utilize. Police officer Hwang and the foreigner Ali Abdul were wasted. Ali Abdul’s introduction was one of the most intense scenes of the show when he holds Gi-hun from one hand before the girl looks back. 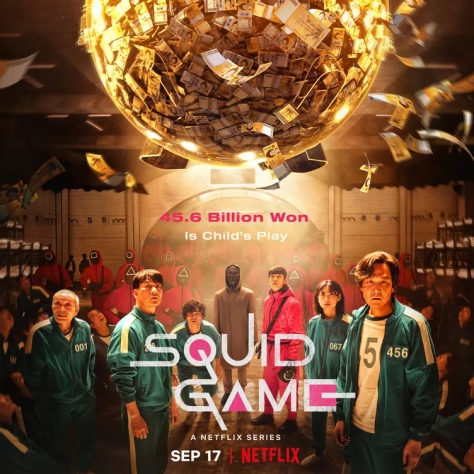 If there is a follow-up season then I think the creator has made a big mistake in the ending. With all the limited content offered for the writing of the plot, the story concludes with most of the characters meeting their deserving ends. So continuing out of nowhere, you need much a bigger picture to attract the viewers for eight or nine new episodes again. The biggest revelation in the finale was needless. But again, do we really need the second season? Can you just leave that secret organization and the dirty power kill scores of participants? Should the madness be stopped by someone or was that a slap on our hypocritic cheek? So if there is the second season then the writer, with all the global hype, is taking a huge responsibility.

But overall, Squid Game is one of the most exciting shows released by Netflix. This is easily recommendable to all the viewers who are looking for a potential story.