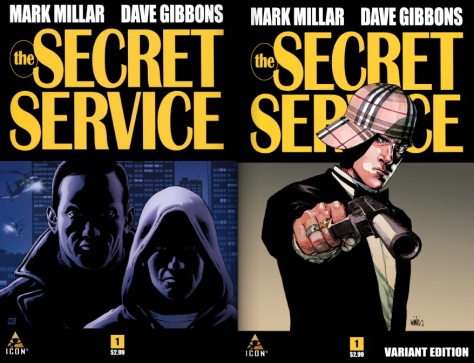 Gary “Eggsy” Unwin lives with his mother and brother Ryan in Peckham, South London. One night, he gets arrested for smashing up a stolen car. His uncle Jack London bails him out and recruits him to work for the British spy agency. After a three-year training, Eggsy is put in use to work as an agent, and along with Uncle Jack, they investigate a series of celebrity kidnappings that leads to the dangerous Doctor James Arnold whose mission is to reduce the human race to only one billion population to avoid facing a total extinction and establish a brand new society of intellect.

British literature has a proud history of presenting one of the most pre-eminent spies and detective writings. Kingsman may not rank amongst the great writings but established a cult status, especially after the first graphic novel was turned into a film. The popularity of the novel can be observed this way that Kingsman’s first novel ‘The Secret Service‘ was published in 2012 but the idea of filming the book began the very next year.

The Secret Service was created by a trinity of Mark Millar, Dave Gibbons, and Matthew Vaughn. Millar wrote, Gibbons drew, and Vaughn co. plotted. The novel has six issues and those who have watched the first film in the series will enjoy reading this and remember a lot of scenes coming straight from this novel. But after reading this, I feel that the film improved by sensationalizing the story. The audience will get more joy in watching than reading because of the ideas and the changes that were developed in the film.

And these are major changes I am talking about. Professor James Arnold, a small character portrayed by Mark Hamill in the film is actually the main antagonist of the novel as Doctor James Arnold. Colin Firth‘s Harry Hart is Jack London in the book but his relationship with the main character Eggsy differs. He is an uncle to the kid in the novel but not in the film. In fact, the film had a backstory that well supported the cause that introduced Eggsy to the spy agency. The famous William Horman quote Manners Maketh Man wasn’t written in the novel but picturized in the film. Jack London’s death scene is totally different, he got killed by Professor Arnold without knowing his identity whereas, in the film, Harry Hart is killed by the antagonist Richmond Valentine portrayed by Samuel L. Jackson after that magnificent action sequence inside the church. Gazelle is an African-American man in the book who can also speak but is a mute girl in the film.

So many things changed in the film but these are acceptable because it was the trinity of Millar, Gibbons, and Vaughn who made this film. Millar and Gibbons were the executive producers and Vaughn directed this. So there is no point in questioning the changes if the creators of Kingsman were responsible for the decision making.

Dave Gibbons’ artistry has a classic detailing of old-school comics with pretty good care on facial moods, posh attires, and brilliant bloody violent action scenes. Observe the gunshot exploding in Jack’s head. I don’t know why I have this feeling but the Blu-ish theme used in the night scenes is striking like Eggsy’s team flying near the mountains in Switzerland or the balloon in the air.

The Secret Service is a short story that gives the readers its share of entertainment, enjoyable humor, quality violence, and such an impressive character detailing of Eggsy and Jack. The fans of the Kingsman series can definitely give a try to this book.

If any reader is willing to watch a visual commentary about the graphic novel and the film, watch this video.

The King’s Man is the third chapter in the Kingsman series of films that takes the audience more than a hundred years back to present what were the causes and factors involved that gave birth to the Kingsman organization. Directed by the same guy, Michael Vaughn, this film touches on so many important political events that happened before, during, and after World War I.

The Kingsman films are basically a comic book series ‘Kingsman‘ written by Mark Millar and the artwork by Dave Gibbons. Kingsman is so far consisting of three parts, starting with ‘The Secret Service‘ of 6 issues. Then ‘The Big Exit‘ which is only 1 issue. And then ‘The Red Diamond‘ of 6 issues. Keeping in mind, Mark Millar gave birth to Kingsman in 2012 and Michael Vaughn picked the literature in 2014; so the Kingsman franchise in all formats has made steady progress in just 10 years.

History has been one of my favorite subjects. Therefore, time-traveling with Kingsman to one of the most important political events in history was necessary. Of course, the events were not historically accurate. Hitler didn’t kill the Tsars, Mata Hari didn’t seduce Woodrow Wilson, Rasputin wasn’t a fighter, and many more.

There may be two reasons for these inaccuracies. One is that Michael Vaughn took the liberty to present the film with such theatrical license to become how the history would look like to build a purpose of giving birth to an organization.

The other reason is maybe this is how the original source of the comic book series is written. And if that is so, then the historical inaccuracy does not become a problem because the writer has the liberty to present his/her audience the way he/she wants to write a fictional story on a real event. There is no argument in that. There are tons and tons of fictional novels based on real events and that is completely okay. If anyone still has any objection, let me drop this to you, Joker was once Iran’s representative to the United Nations *cough*.

One more fact that we need to acknowledge is that Mark Millar and Dave Gibbons themselves are the executive producers of all three Kingsman films. So no one should have any problem with any portion of the story if the Gods of that universe are the ones financing these films.

Michael Vaughn’s direction was quite different than the previous two installments. But I must say, the direction was pretty complex in the middle of the film. I felt the film was deliberately running fast, they have to catch the train and reach the platform where the organization will come into existence. But also, Michael Vaughn usually paces the screenplay.

The casting of this film is so elite and perfect. Ralph Fiennes in the leading role as the Duke of Oxford was marvelous thought. He perfectly suits a franchise like Kingsman. Tom Hollander! I mean what a smart and intelligent pick for the triple role of Tsar, Wilhelm, and George. Giving such heavy roles to the same actor was funny and clever as two of the three, Tsar and George were identical. To my utter shock, Rasputin is played by Rhys Ifans. Never imagined him being Rasputin. What a thought! He looked so Rasputin in superb makeup. And I found this Rasputin in physical presence better than Ben Cartwright‘s in the limited series, The Last Czars.

Maybe the film is not appreciated because of the complex direction in the middle of the film and is quite different than the first two Kingsman films. But I recognize the importance of this film and I think it was quite alright. I liked the idea of how one evil sent his followers to bring hell on the global powers. This film is extremely political and may also be the reason that Kingsman fans showed less fondness as compared to the other two. But I believe, this film stays untouched by the graceful aesthetics and makes no harm in this Kingsverse. With the development in the mid-credit scene, I wait for its continuity.